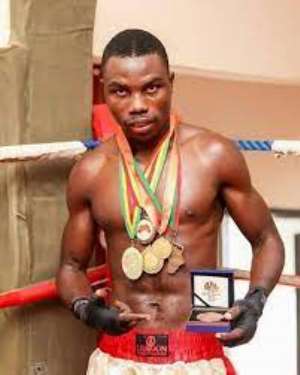 Ghana Prisons Officer and boxer, Musah Rahman Lawson was the happiest man on Sunday at Akropong when he beat Bernard Ayitey Tagoe via a round two TKO to become the new Ghana Super Welterweight Champion.

The event put up by S3 Promotions was highly attended and the boxers on the bill put up marvellous displays of boxing.

Super Middleweight Haruna Umaru beat John Mensah in round one, while Flyweight Isaac Aryeetey also won by a round 4 TKO over Jacob Tackie.

Former World Title Challenger Maxwell Awuku shrugged of a gallant challenge from Moses Dodzi to win in round five.

Budding talent, Prince ‘The Buzz’ Larbie was the toast of fans as he thrilled them with his scintillating artistry in an exhibition bout.

The Chief Of Akropong and Sports Minister Hon. Mustapha Yusif were among the dignitaries who graced the show.