'No sex' - Striker Kwame Opoku reveals his secret as a footballer 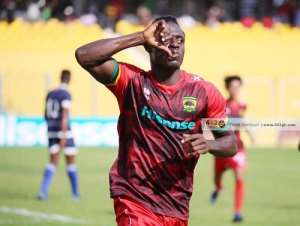 Former Kumasi Asante Kotoko midfielder, Kwame Poku has said abstaining from sex has been his secret as a footballer.

Poku before his move to Algerian side, USM Alger has been sensational in the Ghana Premier for the Porcupine Warriors.

Poku, 22, in an interview with My Fabulous Zone, said that despite having a chunk of female friends he is yet to enter into a relationship.

According to him, he has gotten to where he is due to his decision to his abstinence from sex.

He added he decided to abstain from sex and rather pay rapt attention to his career as he believes that will make him go places not sex.

“I’m not worried; I have now begun life. I have female friends but I am not dating at the moment," he said.

“I have never entered into a relationship before and that keeps me going as a footballer. I have been strong in the game because of my abstinence from sex," he added.

Poku made his maiden appearance for the Ghana national team against South Africa in the ongoing 210 Africa Cup of Nations qualifiers in Johannesburg.

He joined Asante Kotoko prior to the start of the 2020/21 Ghana Premier League from Division One League side, Nkoranso Warriors.