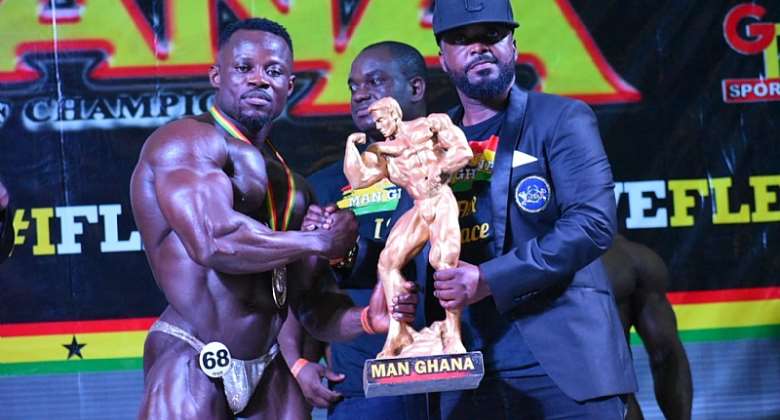 The Next Level Man Ghana 2020 is Godwin Frimpong

The Next Level Man Ghana 2020 Champion defended his title by beating off stiff opposition from Lightweight and Middleweight Category winners, Michael Otu Abakah and Derrick Marley.

He will represent Ghana at the next Arnold Classics in South Africa. He was also given a trophy, medal, certificate, cash and products from sponsors. Godwin Frimpong also won the Heavyweight Category at the Competition

Vanessa Kolekie took the Female Bikini contest. She became the first female to win it twice after lifting the trophy in the 2019 edition of the Man Ghana Competition.

Female Figure athlete, Mary Nyarko Omale received her prize. She was the only competitor in that category.

Hardworking President of the Ghana Bodybuilding and Fitness Association, Abdul Hayye Yartey received his meritorious award from the General Secretary of the Sports Writers Association of Ghana, Charles Osei Asibey.

He is really hard-working as President of Cheeta FC and doing so much for the youth in Ghana.

'My madam brought me from Nigeria, I've to do 'ashawo' to pa...
8 minutes ago