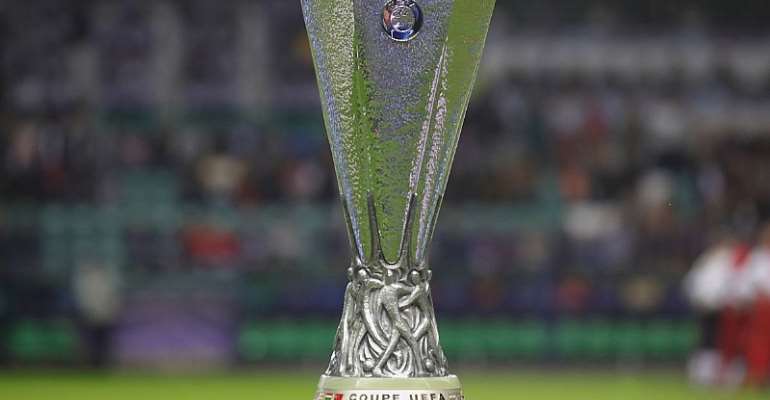 FA Cup winners Arsenal will face League of Ireland side Dundalk, Rapid Vienna and Molde in Group B of the 2020-21 Europa League.

Tottenham have been drawn alongside Bulgarian champions Ludogorets, LASK and Royal Antwerp in Group J.

Scottish champions Celtic face a tough task in Group H as they take on AC Milan, Lille and Sparta Prague.

Rangers are in Group D alongside Benfica, Standard Liege and Lech Poznan.

The first three group matches will take place on successive Thursdays from 22 October.

Arsenal qualified for the group stage by beating Chelsea to win their record 14th FA Cup in August. The Gunners lost to Chelsea in the 2019 Europa League final.

Dundalk beat Faroe Islands club KI Klaksvik on Thursday to secure their spot, while Austrian side Rapid Vienna were eliminated from the Champions League third qualifying round.

Tottenham, two-time winners of the preceding Uefa Cup, beat Maccabi Haifa in the play-off round, while Leicester were beaten to a top-four place on final day of the 2019-20 Premier League season to end up in the Europa League.

CSKA Moscow, who won the 2005 Uefa Cup, are in Group K along with fellow former winners Feyenoord, Croatia's Dinamo Zagreb and Wolfsberger of Austria.