I Was Destined To Be A World Boxing Champion – David Kotey 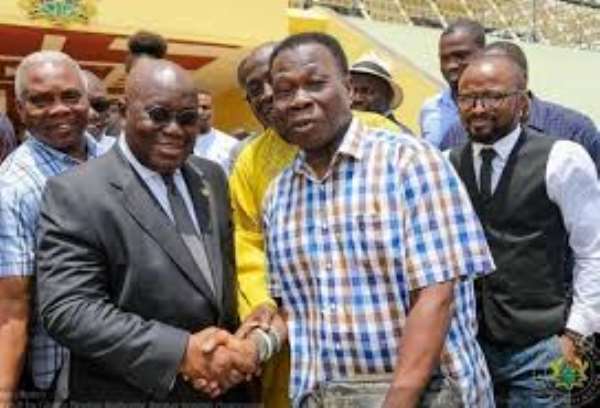 Ghana’s first world champion, David Kotey aka D. K. Poison has revealed that he was destined to become a world boxing champion, and he really worked towards it and succeeded.

Speaking on GTV Sports Plus programme, ‘Night With The Champions’ hosted by boxing journalist/presenter, Mohammed Amin Lamptey, he said the WBC world featherweight boxing title was his reward to the nation, and out of his prize, the government of the day borrowed $45,000 which has been failed to pay back.

D. K. Poison disclosed that he never learnt the noble art of self defense anywhere but by himself, and winning the African and Commonwealth Boxing titles qualified him to fight for the world title.

According to him, he defeated Evans Armstrong of Australia for the Commonwealth title before beating Mexican Ruben Olivares for the WBC featherweight crown in the USA.

He said at the press conference before the world title fight, he knew the belt will be his, and even told the defending champion to hand it over to him.

He stressed that many boxing fans who watched the bout thought he was going to lose, but he punished his opponent with his superb skills and won in style, causing mayhem at the venue after the fight with fans throwing around anything they came across. His coach, Attuquaye Clottey was hit with a chair and had to visit the hospital.

D. K. Poison hinted that he took inspiration from Floyd Robertson, one of the nation’s best boxers who was robbed of the opportunity of becoming a world champion.

His first professional bout was on 5 February 1966 in Accra when he outpointed his opponent over six rounds. He became the national featherweight champion that year. Although he fought once in neighbouring Togo in 1967, all his subsequent fights through to 1971 were in Ghana.

In 1972, he fought as much as seven times in Australia, winning five and losing two.

He won the African featherweight title on 2 February 1974 when he knocked out Tahar Ben Hassen in the first round of a scheduled 15 round fight in Tunis, Tunisia. Later on 7 December 1974, he also won the Commonwealth featherweight title with a technical knock out over Evan Armstrong, a British boxer in round 10 of a scheduled 15 rounds bout. This victory gave him an opportunity to go for the World Boxing Council version of the world title.

He relinquished the African and Commonwealth titles following this victory. The Ghana government gave him an estate house at Teshie-Nungua, an Accra suburb in honour of these achievements in boxing.

He, however, lost the title in his third defence on 6 November 1976 by unanimous points decision to Danny "Little Red" Lopez in a fierce fight in Accra, Ghana. He is married with three daughters. He also defeated Fuku Yama in Japan.

DK Poison was never the same again after this defeat. He failed in 1978 to regain either the world or commonwealth featherweight titles. His last professional bout was in 1989 when he lost an African lightweight title fight.

According to reports and Kotey's own story, in 1976, he loaned an amount of 45,000 dollars to the Government of Ghana, then led by Ignatius Kutu Acheampong. The money was intended for the purchase of canned mackerel to mitigate the harsh economic and food conditions the country was facing. The loan had been facilitated by his management, which was led by Col John Slater.

According to Kotey, the money was part of his reward for defending his title against Japan's Fuku Yama in 1976.

The loan has not been paid back to date because shortly after the canned mackerels arrived in the country, the Acheampong's regime was overthrown by General Akuffo in a military palace coup in October 1975.

In September 2019, the president of Ghana, Nana Akufo Addo noted that he would look into the issue. This was at a meeting with a delegation of former world boxing champions from Ghana led by the Ghana Boxing Authority (GBA).