Meet The Twins Living Their Football Dream In Gambia 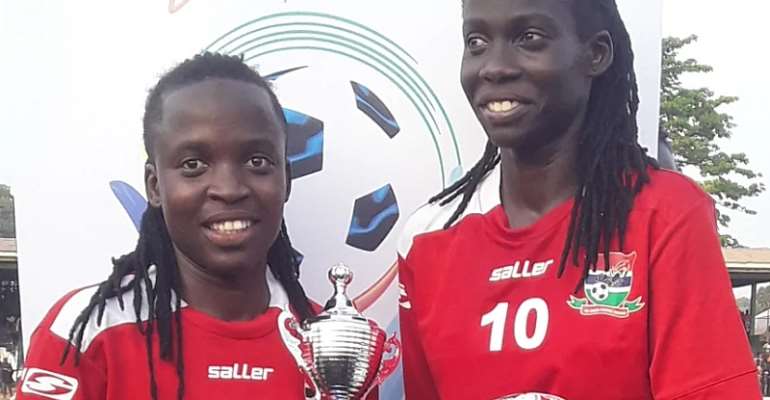 It was dream come true for twin sisters, Adama Tamba and Awa Tamba when they made their debut for the Gambia U-17 team in a FIFA Women’s U-17 World Cup qualifier against Sierra Leone in 2012.

The sisters have not looked back since shocking the football gods by qualifying the tiny West African Nation to the 2012 FIFA Women's U-17 World Cup in Azerbaijan and starred for the Scorpions during the WAFU ‘A’ Women’s Championship in Sierra Leone last March.

Born in Banjul, the duo grew up at the SOS Children's Village in Bakoteh (outskirts of the capital, Banjul), having lost their mother at a tender age whilst father, Lamin Tamba, a famer, lives in the hinterlands of the West African country. They started by playing with their male counterparts at Primary and High school.

"Having them in the national team under my watch the past four years has been great. Adama has scored in almost every game, and Awa has assisted most of her goals. They are focused and want to win every match. If I should describe them on the pitch, I can say that they are result oriented, promising, hardworking, and dedicated"Mariama Sowe

However, football has given the Tamba sisters, who feature for one of Gambia's top Women’s First Division side, Red Scorpions, an opportunity to better their lives, and have been working towards the dream of turning professional and playing in major women’s football league abroad.

Gambia coach Mariama Sowe who also coached the duo at U-17s level is fond of the 21-year old twins who draw their inspiration from the Nyassi brothers (Sainey and Sanna), who were key players of the Scorpions few years ago. The Nyassi twins made global headlines after their role in Gambia’s maiden continental triumph, the U-17 Africa Cup of Nations title in 2005 on home soil.

“Having them in the national team under my watch the past four years has been great. Adama has scored in almost every game, and Awa has assisted most of her goals. They are focused and want to win every match. If I should describe them on the pitch, I can say that they are result-oriented, promising, hardworking, and dedicated,” Sowe told CAFOnline.com.

“They will shine brighter when they join bigger clubs as they have been yearning for. And when such an opportunity comes, they will show to the world their skills and thirst to make marks at the professional level.”

It is easy to differentiate between the two. Adama is slim, taller and plays in attack. On the other hand, Awa is a defensive midfielder.

Unlike Awa, Adama holds her country's record for the most goals in the league and the national team. The lethal forward has scored 165 goals in 114 league appearances adding to her 18 goals in 12 matches for the Scorpions.

Her knack for scoring goals has made her one of the most lethal strikers in the region thus earning her tryouts with French clubs Lyon and PSG in 2018.

“I love playing football. My ambition is to shine, win titles with the national team and to play abroad for the world to know of my skills and abilities.

“I scored 51 goals in ten games to help my club move from relegation, in our National Women’s League in the 2017/2018 football season. I am addicted to scoring goals,” said Adama who scored five goals in three matches at the regional championship last March as Gambia crashed out at the group stage.

“We have promised each other to keep going with our football career and to emulate and even do better than Nyassi brothers (Sainey and Sanna), whom we escorted to the pitch during matches for the national team,” Awa recalled their days as escorts for the various national teams.

“We will continue to deliver our best performances in every game to get to the top.”

Besides playing football, there is life for the sisters outside the pitch. They operate a restaurant after successfully undertaking a Vocational Course program in Hotel Management with the Gambia Girls Guide.

They have won several trophies with Red Scorpions including the league, FA Cup, Super amongst others.

“Adama and Awa are like sisters to me. We have played together for almost ten years, travelled around the world for both club and national duties. Having them in any team is a blessing. I’m always proud of their talent and the very strong bond they share as twins which they usually show in the field of play.

“Awa, always support her Adama to score goals. In fact, after scoring a goal, she will be on her sister’s back celebrating before any of us could join them,” Gambia captain Penda Bah CAFOnline.com.

The Tamba twins are hoping to go the extra mile by powering Gambia to the 2020 Women’s Africa Cup of Nations. To realize that dream, they will have to face Guinea Bissau at the First Round of the qualifiers. Seasonal campaigners Ghana awaits them at the second and final round.