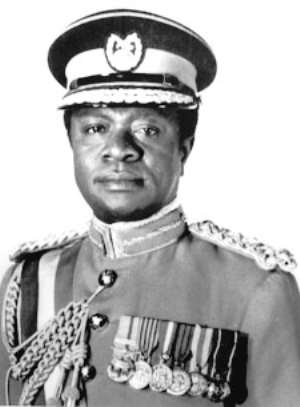 He left school with a Middle School Certificate; GCE 'O' Level and a Diploma in Commerce. Between 1945 and 1951 Acheampong worked as a stenographer/secretary at the Timber Sawmill in Kumasi, taught at Kumasi Commercial College and was Vice Principal at Agona-Swedru College of Commerce.

In 1951, he enlisted as a Private in the colonial army and went on a training course in Aldershot, England. He served with a contingent attached to the British Battalion, which was based in Germany. On returning to Ghana, he was commissioned Second Lieutenant. From 1959-1966, Acheampong attended several courses including one in Personnel Administration at the Staff College, Fort Leavenworth, Kansas, USA. He became the Commanding Officer of the 5th and 6th battalion and was mentioned in dispatches while serving with the Ghana contingent on the UN Belgian Congo Peacekeeping Force.

From 1966-1971 he was Chairman for the Western Regional Committee of Administration and between 1971-1972, he served as Commander, First Infantry Brigade.

In 1972, Acheampong used the general discontent on Busia's devaluation of the Cedi by 44% to stage a military coup which overthrew Busia's government, and made himself Head of State, Chairman of the National Redemption Council and the Supreme Military Council, and also, Minister of Defence and Sports. As Head of State, General Acheampong suspended the 1969 constitution, banned political activity, detained over a thousand people and set up powerful military tribunals.

He promised to redeem Ghana and initially gained popularity by repudiating some of Ghana's foreign debts on the slogan 'yentua' (we wont pay). He preached self-reliance and launched 'Operation Feed Yourself' by which Ghana was expected to be self-sufficient in food production. Ghana failed to achieve self-reliance as corruption, smuggling, inflation and food shortages prevailed. Economic hardships led to outbreaks of discontent which he suppressed; harsh measures were taken against strikers and the trade union movement.

Acheampong proposed a 'Union Government' in which power would be shared by civilians politicians and the armed forces, thus doing away with partisan politics; this led to violent student demonstrations (Jan 1977) and the closure of Ghana's universities. Although a referendum in 1978 showed that the majority of people supported 'Union Government', there was a general feeling among the general public that the referendum was rigged. Violent clashes between pro and anti UNIGOV factions led to the killing of at least four people in Kumasi.

Acheampong was so unpopular by 1978 that he was ousted by his military colleagues on the Supreme Military Council and replaced by General Akuffo (July 1978). He was charged with sabotaging the economy and cashiered by Akuffo and confined to his hometown in the Ashanti Region. In June 1979 he was executed by firing squad after a short trial by the Armed Forces Revolutionary Council which had seized power under the leadership of Flt. Lt Jerry John Rawlings.