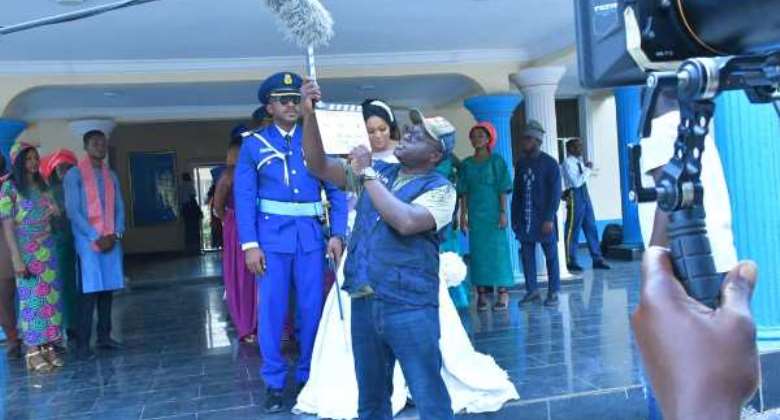 “Eagle Wings’, a Nollywood advocacy film that chronicles the Nigerian Air Force (NAF) gallant fight against insurgency in defence of national peace and unity is set to hit cinemas on March 12, its producers have said.

Paul Apel-Papel, script writer and director of the film, disclosed this in an interview with News Agency of Nigeria (NAN) on Thursday in Abuja.

According to him, the film is produced by Papel Image Tech in collaboration with the NAF, with support of the Air Force Investment Company as part of efforts to showcase activities of the military through films.

Apel-Papel explained that the blockbuster, acclaimed to be Nollywood’s biggest collaboration with the Nigerian Military, explores the efforts and sacrifices the Air Force and the military in general make in defence of father land.

He noted that being a military film, the Air Force supplied the equipment and logistics required during the shooting of the film in Kaduna, Borno, Abuja and other places.

The ace filmmaker said that NAF also trained the cast of the film in order to present an unbiased and professional story of operations of the military.

“The goal of this movie is to show to Nigerians the efforts of the military in nation building and for us also to know what they go through and the sacrifices they make.

“Their families and friends also need to see and appreciate what they are going through out there in protecting us.

“The story is about three brilliant course mates who are also best friends and are faced with a challenge in the course of doing their work, and ended up rescuing a whole community.

“We want Nigerians to appreciate the Air Force and the military in general for the efforts and the sacrifices they make out there to keep our nation together.

“We want the people to see reasons why they are out there day and night in defence of our country,” he said.

Apel-Papel explained that in the bid to get its message to every Nigerian, the film was presented in Hausa, Igbo, Yoruba and pidgin English versions.

He said the cast of the acclaimed film include Femi Jacob, Yakubu Mohammed, Kepi Ekpeyong, Funky Mallam and Enyinnaya Nwigwe.

Others are Sidney Idiala, Iyke Odiase, Francis Duru and Sadiq Daba, among others.

According to him, ‘Eagle Wings’ will correct some wrong perceptions many Nigerians hold about security agencies, and ultimately garner support for them.

“With this film, we are helping to mould the minds of Nigerians that the military is needed for our national peace and unity, and if given the kind of support needed, they will do better.

“In this film, what takes you first is the image, the sound and then the dialogue, that is why the film is in different languages.

“With the kind of arsenal that was deployed to us and the training we went through, it is normal that we deplore the best equipment in telling this story, and we did just that.

“It is a film that can go to the Oscars without arguing because the quality and the sound are there.

“We want Nigerians to go and experience the Eagle Wings, because it is an experience,” he said.

He explained that the film had passed through private premiere in Abuja, and would be offered for public premiere in Lagos on March 7, before showcasing it in Cinemas across Nigeria on March 12. (NAN)