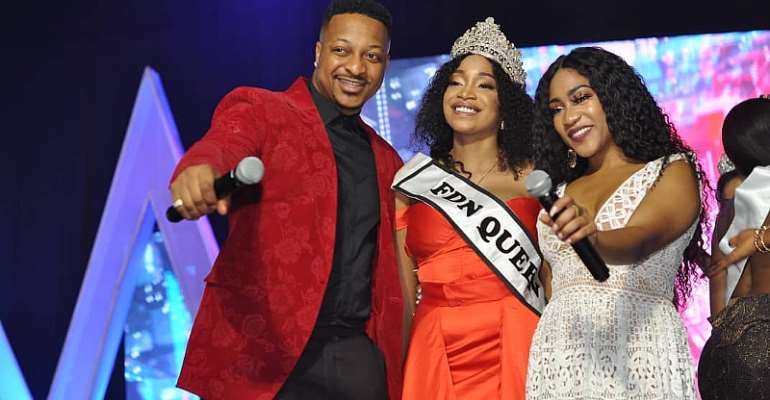 In Abuja, few hours ago, young, vibrant and intelligent Chioma Patyline emerged Winner of Face of Democracy Nigeria Brain Pageant held at Transcorp Hilton Hotel. Queen Chioma Patyline was crowned Winner of the 2020 Face of Nigeria Brain Pageant at a quite competitive Contest and a well attended pageant event, which witnessed 15Contestants and 5 Winners.

Queen Chioma Patyline had represented Bauchi State in the Contest and was noticed to be unique in her dealings, charisma, engagements and activities during Camping moments. She however hails From Ezeowelle Idemili North Local Government Area of Anambra State.

The colourful event which was completed by the energetic duo of Shalini Malaki and Actor IK Ogbonna had entertaining Presentations from the contestants, Sugar Boy, BlackSolo, Funny Bruno and others.

As a final year Student of Linguistics at UNN, Queen Chioma will be dedicating much of her time towards engaging development initiatives to support and Improve the democracy of Nigeria. She has continue to received congratulatory messages, commendations and remarks with regards to her victory as Winner of Face of Nigeria Brain Pageant.

In a remark from the Principal Executive and Founder of Face of Democracy Brain Pageant, Amb. Fajag Ajagbonna, congratulated Queen Chioma Patyline and encouraged her and other winners on the path of focus, thereby engaging creative and innovative roadmaps as the new crowned Queens of FDN2020/2021.