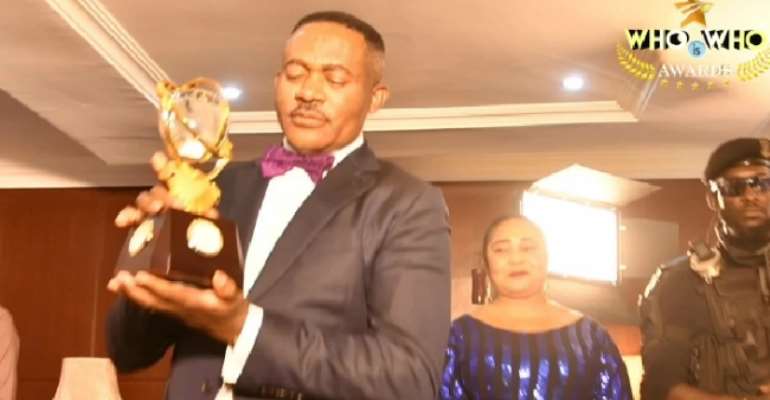 US Nigerian Medical Doctor and Philanthropist, Dr. Godwin Maduka has been honoured with the Stand Of Fame Award, organised by Who is Who Organisation. He was recognised as "An Exceptional Humanitarian" at the 2020 Edition of the prestigious and distinguished WHO is WHO Stand of Fame Awards.

According to our correspondent, Hall of Fame recognised renowned selected Personalities who have impacted on humanity especially charity and humanitarian Organisations in Nigeria.

he noted that the recognition was premised on the impacts made by Philanthropic organizations and NGOs in promoting development and empowering humanity.

Notably, the 2020 annual Stand of Fame Awards had recognised the likes of Mr. Aliko Dangote, Mr. Tony Elumelu, Hon. Ned Nwoko, amongst other great personalities. In reaction from Dr. Maduka, he applauded the Organization for the recognition as he spoke extensively about his childhood and poor background before he made it big through hardwork and Support from his brother to further his education abroad.

The Anambra Governorship aspirant and Billionaire Philanthropist is the founder of Las Vegas Pain Institute and Medical Center In 2008. He has invested over $20 million in various community development projects in Umuchukwu.He built houses for the poor, churches, market, schools, police station, police academy and college, post office, magistrate court and a high court for the Anambra State government.Dr. Maduka also built a 17-floor multiplex medical research centre in Umuchukwu.

In a reaction from Hon. Ned Nwoko, who was equally presented with a Humanitarian Award, appreciated the Organisers for taking cognizance of his foundation's impact, especially in areas of Malaria eradication in Africa.

Suspend Sammy Gyamfi if he fails to apologize to Speaker, Ha...
19 minutes ago

Shame on you for abandoning post for 3 hours to go drink tea...
23 minutes ago