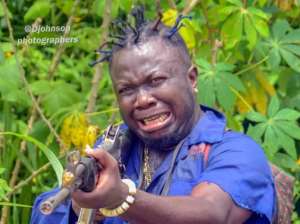 Fast rising Nollywood Actor, Charles PITAKWA Maduka, who is known for his radical approach to interpretation of roles in movies has yet again recorded another extreme scoreline.

The Anambra state born actor who is a graduate of the Nnamdi Azikiwe University practically swam in a pool of dirty swamp on the set of the movie project he is working on, in Asaba Delta state.

On his arrest scene in the movie, the Geologist turned actor fell head-on into a pool of mud and rolled over after being kicked from behind by the arresting policemen.

The movie, which features the likes of veteran actors - Sam Dede, Hanks Anuku, Emmanuel Ehumadu, and directed by Ilochi Olisaemeka is an action packed movie set to be released later in the year.

DonCharles PITAKWA Maduka has succeeded in winning the hearts of the teaming Nollywood fans with his reckless and unique style of acting.

When asked why he normally goes extreme to interpret his roles, the controversial actor has this to say, "Do not be ashamed of your hustle. Nobody will feed you if you go broke."