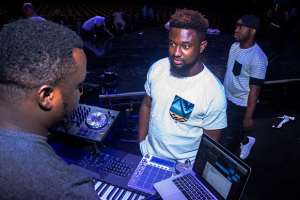 Alternate Sound was the official band for the 12th edition of The Headies awards. They performed at the nominees’ party held in Abuja on the 28th of April, 2018 and the award ceremony at Eko Hotel & Suites, Lagos on the 6th of May, 2018.

The premium band contributed immensely to the success of the award show and has clearly raised the bar for live performances in the music industry. Guests at the award ceremony were blown away by the ace performance of the four man band who worked with every artiste to ensure that their live performances were brilliant.

Nigeria’s music producer Gospel Obi popularly known as GospelOnDeBeatz who put together Alternate Sound Band in May 2015, revealed that the team rehearsed eighteen songs for a total of thirty five hours over seven days to ensure the smooth delivery of the live performances at the Headies. This showed in the performance of notable artistes like Tiwa Savage, Simi, Falz, Reminisce, Mr. Reel, Zule Zoo and Mad Melon and Mountain Black. They brought out the best in the thirteen live performances with optimum sound synchrony.

Alternate Sound consist of four talented band members; Gospelondebeatz who plays the synthesizer, Orowo Ubiene a.k.a Roy who triggers the backing tracks on the turntable and plays the piano, Kenneth Ugueji a.k.a Barr Ken plays the bass guitar and drummer, Stanley Amanze also known as StanStyx. Every member of the band is a music producer.

Alternate Sound thrilled guests to a wonderful experience at one of the most talked about Headies in recent times. They teach us that passion, hard work and dedication can take you anywhere.

The third edition of Alternate Sound Live is scheduled for July, 2018 with surprise performances and activities lined up.

Nkoranza youth clash with police over ‘suspicious’ murder of...
44 minutes ago