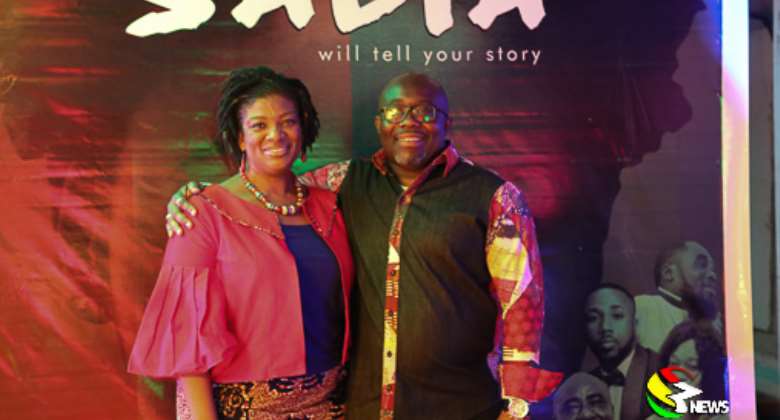 Sadia is an ambitious project produced by Adesa Productions, a member of the Media General Group exclusively for TV3. The thrilling authentic Ghanaian production was premiered at the Executive Theatre, Adesa We on Friday 08 December to a tall list of high profile personalities including Mr. Mustapha Hamid, Minister of Information and Hon. George Andah, Deputy Minister of Communications.

Other dignitaries included the Board of Media General led by Hon. Kojo Yankah as well as the Actor’s Guild led by President, Sam Fiscian who praised Media General for introducing the novelty and consistently promoting local content on TV3.

Speaking to Media General’s commitment to working with the Creative Arts industry to promote local content, Group CEO Pearl Esua-Mensah said “ Two months ago, during a courtesy call to the Honourable Minister of Communications, I reiterated Media General’s long standing tradition of promoting local content through our channels and made a bold commitment to ensure that prime time on TV3 was dominated by local productions. Today is the first major step to bringing that ambition to life.

As the leading Media organisation in Ghana, we have a rich and enviable history of setting the agenda and leading the way through our world class programming and content strategy. We remain committed to using our influence to champion the promotion of local content to enrich the lives of our audience and the creative arts industry in Ghana. Sadia was birthed both out of our ambition to predominantly promote local content and the need to provide the needed leadership in an industry that has been taken over by foreign dramas and telenovelas to the detriment of local producers.”

She concluded “Sadia is a griping drama series that tells the story of the protagonist and brings to the fore some of the challenges many families face. This groundbreaking drama series is an authentic local alternative to foreign telenovelas and we are certain Ghanaians will love every bit of it”.

Commenting on the newly introduced drama series, Hon Mustapha Hamid said “ TV3 has always proved itself a leader among English speaking TV stations. I have followed their programming over the years and I believe they deserve to be highly commended for their leadership in news and commitment to promote local content. I am of the firm believe that Sadia will power TV3 to lead the industry in rankings. From what I have seen, this is a fantastic production and I will make the time to follow Sadia as the story unfolds”

Sadia aires at 8PM, Mondays and Tuesdays on TV3.