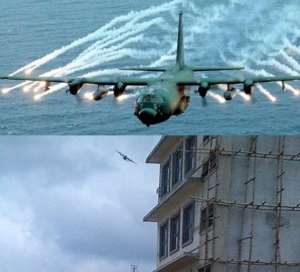 Unexplained Collapse Of A Newly Built Multi-story Building At the Synagogue Church Of All Nations In Nigeria.

Remarks based on the known data of the case:

Before the collapse of the building, it was recorded that at least four times, there was a crossing of a military airplane. It appears to be a Hercules C-130, which is a military aircraft, not civil.

What was a fighter plane doing midday over a residential area many times (at least 4 times that the camera shows) and, most especially, over this building?

The flight routes of these military aircrafts are scheduled by the appropriate military service and are recorded in the service radars. Therefore, it should be investigated:

(a) The planned flight route of the aircraft that day (12.09.2014), on the basis of the official records of the service and whether it was planned to pass so many times above the particular residential area.

(b) Why and for what purpose is the transit of a military aircraft that hour and even for many times over this building? It seems completely inexplicable, useless and, therefore, entirely suspect. This is the crossing of a military aircraft on the particular residential area, which is a peaceful Christian area and shows no indication of an outbreak of terrorism, nor has ever attracted the state's interest as a terrorist area.

These types of aircrafts (C-130), which usually fly at low altitudes, because of their design, are capable of carrying a heavy military load of several tonnes and, in particular, heavy armored tanks. So, they can easily carry:

They are also capable of causing strong vibrations in buildings, equivalent to bombing, without being perceived by the human eye or with human ears. The focus of the beam on specific targets like buildings, factories, etc…, can cause instability in the balance of the building, resulting in the collapse of the building, either directly or at a later time.

Nobody knows exactly what cargo or equipment (machinery, etc...) was contained within the contents of this aircraft, which no one could see from the outside without entering the interior of the aircraft.

In this case, it is a newly built building. Because it is newly constructed, it is impossible to suddenly collapse on its own without a strong external interference that would upset the stability of the building, taking into account the fact that on that day, there was no natural earthquake nor a heavy rainfall that could affect the statics of the building or the land on which the building rests. This, both common sense and Engineering Science, requires us to accept.

The only remaining plausible explanation of the sudden collapse of the new building is the intervention of powerful forces, invisible to the human eye, caused by modern (obviously) war machines equipped with mechanisms for producing extremely powerful beams of electromagnetic waves and very strong ultrasonic and infrared waves, equivalent to bombardment, which apparently caused the collapse of the new building.

Finally, the date of the collapse of the building (September 12) refers by definition to a similar collapse of the multi-storey buildings (World Trade Center) which was a symbol of the United States on September 11, in the USA, by Muslim extremists. It is therefore a logical connection of a similar terrorist event at the symbol of Christianity in Nigeria, which is The Synagogue Church of All Nations, led by Prophet T.B. Joshua. Moreover, the conflict between Muslims and Christians in Nigeria is well known.