I Am Neither Proud Nor Arrogant- Joseph Benjamin 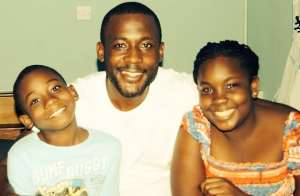 Joseph Benjamin is a multi-talented Nigerian Nollywood actor who got his big break as the co-host of MTN Project Fame West Africa Season II (a reality TV show).
The award-winning Nollywood multi-talented actor is also a model, musician and compere, but often mistaken for been pompous and arrogant. In a bid to clear such speculation hanging around his neck, the Kogi State handsome dude this morning posted a picture on his Instagram page explaining reasons he is the way he is.
"Close some doors not because of pride, incapability or arrogance but simply because they no longer lead to somewhere", the post read.

Although divorced, Joseph is blessed with two lovely children, a 10 year old daughter and 7 year old son. He had also said he still committed to his kids and would continue to love and care for them.

“I've been separated from my wife but we still keep a good relationship, and our separation was a mutual agreement. She is a good woman but I could not go on with the union anymore seeing the foundation it was built on was untrue. I have two wonderful children. They are an integral part of my life; their mum and I have a very good arrangement on how to balance their lives and make sure that psychologically they are stable and unaffected by our separation.”

Rapper, MI Bed-Ridden With Asthma**Laments On Inability To Smoke

Perennial floods: Water won’t ask if you are NPP, NDC when i...
40 minutes ago

Reflect on issues, put yourself in the shoes of absentee MPs...
40 minutes ago