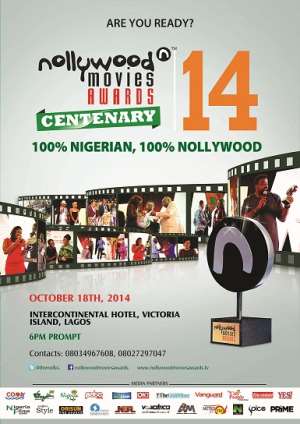 All is set for the Nollywood Movies Awards (NMAs) to formally reveal the much anticipated nominees for the centenary edition. In view of fostering transparency and participation in its upcoming third edition, the prestigious unveil is scheduled to hold on the 20th of September at the Civic Centre, Ozumba Mbadiwe, Victoria Island.

The shortlist of contenders in the 32 Award categories including the Lifetime Achievement Award has been carefully drawn after a general call for entries was announced for movies produced, premiered or released between Feb 1st 2013 and April 31st 2014.

Entries were received from home and diaspora. Results will be deliberated by a panel of credible judges led by Dr Kola Munis, chairman of the panel, who alongside his team brings a high level of professionalism into the process.

In addition, the Popular Choice Award nominees for Best Male and Female and Best TV and Web series will be available online at (www.nollywoodmoviesawards.tv) and via SMS short code portal to allow millions of Nollywood followers to cast their votes. Final results will be announced at the Nollywood Movies Awards amid pomp and pageantry on the 18th of October at the prestigious Intercontinental Hotel, Victoria Island, Lagos.

The NMAs Nominees unveil will host a gathering of notable Nollywood players, celebrities and esteemed sponsors which will be covered by an array of media partners.

It is interesting to note that Nollywood Movies Awards (NMAs) uniquely prides itself as “100 percent Nollywood, 100 percent Nigerian” and its third edition will be in commemoration of Nigeria's 100 years Centenary through celebrating its long-standing film and movie industry.

The NMAs is famed for excellence, glitz, glamour and prestige, dedicated to rewarding exceptional creativity in the Nigerian Movie Industry while depicting Nollywood in good light to the world and equally setting an international benchmark for the industry.

How My Friends Set Me Up -Recently Released Actress, Yetunde Akilapa Reveals