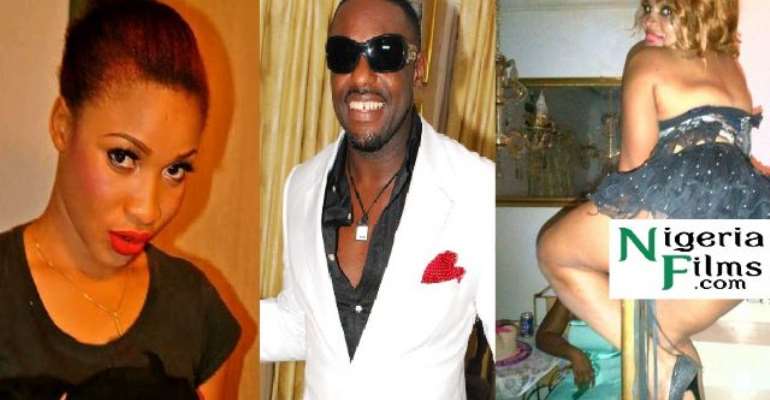 In a very competitive razzmatazz industry in Nigeria, the saying that 'survival is for the fittest' comes to play among the 'jungle' inhabitants. This may have brought about some stakeholders in the game to device controversies as a tactics in staying up in the game.

The Nigerian showbiz world has seen many 'actors' come on stage just once and gone into oblivion. Some have remained on top not because they keep bringing out new things like songs for the musicians and movies for the actors, but have remained in the news because of one negative story written about them or the other.

In this write up, Nollywoodgists.com is taking a look at some of the most controversial Nigerian celebrities in the game.

Charly Boy
Doing this kind of story without Charly Boy's name in it clearly shows some brown envelopes must have exchanged hands to exclude him from the list. Or better still, maybe he may have been blacklisted by the media house doing such story. Area Fada, as he is fondly called, has successfully stayed in the news regularly by creating controversial issues for himself. His different media stunts have turned out to have yielded results. His present name change to Linda' has become another source of news story for the media to feast on. One thing about Charly Boy is that he can create a storm from a tea cup. Charly Boy has successfully replaced his absence from the music scene with self generated controversial issues.

Tonto Dikeh
Another controversial celebrity is Nollywood actress, Tonto Dikeh. Since her emergence into the make-believe world in 2006 after her participation in The Next Movie Star competition where she was a runner-up, Tonto has remained in the news. While at the completion, she was like a young lady that would never like to be in the news for the wrong reasons. But that has faded away. If she is not attacking a colleague today, she is using censored words on her fans tomorrow. In her own case, she is doing well in her acting career. The only thing those controversies may have done to her would be sponsorship deals not coming her way as expected. Also is the fact that she doesn't get to win awards as one would have expected with her popularity.
Her recent try of music, according to her, was to create controversies, which she rightly achieved.

Jim Iyke
In the play-acting profession, Jim would probably be the most controversial male actor in that industry. The 'Nollywood bad boy' tag on him has refused to go. His character in movies has almost become what he is perceived to be in reality. One cannot forget in a hurry his alleged fraud scam with an Abuja-based business woman that just recently died a natural death. Disturbing pictures were even released believed to be Jim with a 'criminal' plank on him.

Olisa Adibua
This former Cool FM but now Beat FM's On Air Personality (OAP) is unarguably one of the most controversial radio personalities in Nigeria. While at Cool FM, he was reportedly bitten by Jim Iyke over a girl. While at Beat FM, he allegedly beat a junior staff, who has now been sacked from the station. Some weeks ago, he was in a war of words with his friend, Obi Asika after he was reported to have been sacked as a director of the company.

Cossy Orjiakor
Just like Charly Boy, Cossy has not really acted in big movies or few home videos lately but she has remained in the news more than those that appear on big screens. Big thanks to her flaunting of her largely endowed 'twin towers' which has become a news material for many journalists. At intervals, Cossy posts compromising pictures of herself, which are quickly feasted on by many online news sites and eventually find their ways in newspapers and magazines. Hardly would a quarter go without Cossy getting in the news.

Emeka Ike
Before now, prolific actor, Emeka Ike was never seen as a controversial person. But his power tussle with fellow actor, Segun Arinze put him in that category. At a time, Emeka was seen as the 'black sheep' of Actors Guild of Nigeria (AGN) when he was persistent in his fight against Segun over the post of the presidency of the Guild. When Segun resigned, many thought Emeka would rest his case but they were proven wrong when Emeka reportedly disrupted the Guild's election held on September 27, 2012. He has also made the present the president, Ibinabo Fiberesima know that she is not the president of the Guild because her process of attaining the office was illegal because of a court order. He even fumed that an ex-convict cannot rule the Guild because of the manslaughter case Ibinabo was involved in few years ago.

Kelly Hansome
After his 'Maga Don Pay' hit single, Kelly Hansome devised controversial means to remain in the news. His bitter fight with former label, Kennis Music, his 'clash' with D'Banj over song infringement, his war with a journalist over a news story of begging a movie producer for a movie role and others are some of the controversies the Imo State-born artiste has swum in. Kelly has not hidden the fact that he is not in the good book of some media organizations, industry big-wigs, colleagues and some DJ, who he has sometimes accused of rejecting his songs for airplay.

Timaya
He calls himself 'Egberi Papa of Bayelsa'. Timaya is another controversial figure in the music industry in Nigeria. While he was at the peak of his career few years ago, Timaya was always in the news for negative reasons. If he is not fighting his actress girlfriend, he is reportedly bullying some of his fans. His trademark line in his songs about enemies and 'olofofos' being after him almost became a cliché to many people got tired of hearing from him.

Tope Alabi
Though a gospel singer, Tope Alabi hasn't failed to get herself into controversies. When the roll call of top Nigerian gospel artistes are called, Tope's name will never be found missing. But her career has also been 'seasoned' with some controversies. Her popular album 'Angeli Mi' was reportedly involved in a legal tussle between a US-based businessman Alhaji Bioku and Tope's Remdel Record label in Nigeria. The case has been in the court for some time now. Just recently, Tope was reportedly attacked by some pastors when she was challenged to name the men of God who she alleged made sexual advances to her. This resulted from an interview she reportedly granted a magazine.

Eedris Abdulkareem
Nigerian rapper, Eedris Abdulkareem is one controversial singer that would be remembered for a long time. He has successfully been involved in controversial circumstances with top world figures. First was with US rapper, 50 Cent who he had a fight with in Nigeria at the airport. Second was with Nigeria's former president, Chief Olusegun Obasanjo when he sang the controversial hit song 'Jagajaga'. He got attacked by the former president and the song was later banned from getting airplay in Nigeria. In August 2012, the issue was again raised by Chief Obasanjo and Eedris did not waste any time this time around in attacking the former president publicly on a social media network, Twitter where he called Obasanjo his 'Mugu'.