How Fetish Priests Killed Ex-Soldier And Buried Him Including Others 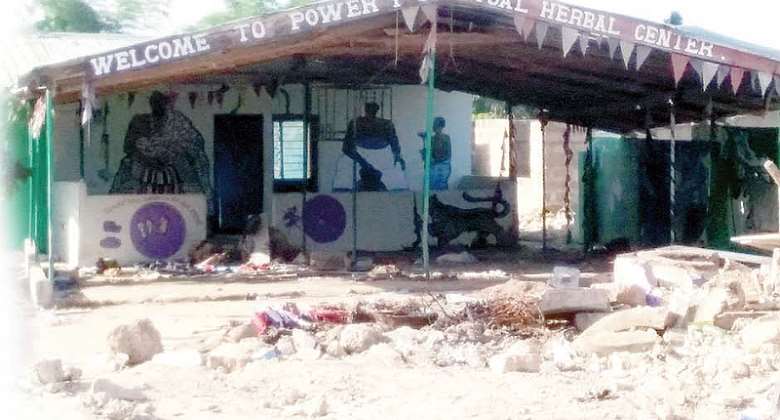 The scene where the bodies were exhumed

Details are emerging about how a special police team raided a shrine in the Eastern Region and exhumed headless human remains from the place.

At least three bodies were found buried in shallow graves when the special team raided the shrine where body parts were also found scattered all over the place.

Two fetish priests, namely Christian Lawoe Gameli aka Power-One, 40, and Famous Adukonu aka Scorpion, 36, who were operating a shrine called 'Power 1 Herbal & Spiritual Centre' located at Adu Kwadwo and Kofi Nyarko villages near Maame Dede Junction on the Nsawam to Adeiso road in the Upper West Akyem District of the Eastern Region, were arrested and brought to Accra during the raid.

The taxi driver, who was arrested alongside both fetish priests last Thursday, had been named as Allotey, and they were being detained by the police for ritual murder, fraud and the production of fake currencies.

The arrest is coming at a time when there are swelling allegations of collaboration between fetish priests, some spiritualists and some fake pastors in the country.

It is turning out that at least one of the victims is believed to be a retired soldier, and his disappearance triggered intense police investigation that led to the raid.

The suspects allegedly murdered the 64-year-old ex-soldier, Edward Quartey Papafio, from Accra, who reportedly went to the shrine two weeks ago to seek spiritual help from the priests.

The soldier's phone led investigators to the shrine, according to police sources.

He was reported to have been duped by the suspects who told him to go and come back in some days.

The old soldier later informed his wife and son, who was also a serving soldier, about the incident before visiting the shrine on the second attempt.

DAILY GUIDE gathered that when he went back to the shrine to confront them, the suspects asked him to sit somewhere in the shrine and in the process they shot him, killing him instantly.

They then buried him at the back of the shrine in the dress that he was wearing.

The deceased's wife who was not hearing from him started calling his mobile phone several times, but the calls didn't go through.

The deceased soldier's son went to the community in search of his late father before reporting the matter to the police CID, who also deployed some investigators to the community to gather more facts.

The fetish priests, as gathered, hail from Togo and came to stay at Suhum, but moved to settle in the current village about five years ago.

They have reportedly built two shrines and a hotel at separate locations during their short stay in the area and are said to be feared by the people.

They usually run advertisement and talk shows on Starr TV, a private television station based in Koforidua, to lure their clients who want to turn millionaires overnight.

They are said to have used their so-called powers to 'dupe' many clients and normally charge not less than GH¢1,000 as 'participating' fees.

Some residents have made wild claims that a lot of people who visited the shrine vanished afterwards whenever the clients tried to fight back after being felt duped by the fetish priests.

The suspects, after the heinous crimes, allegedly bury the victims in their dresses in a manhole at the back of the shrine, and others in the rituals room after removing their parts.

They further claimed that some kids have been reported missing in the community ever since the duo settled in the area.

Some even alleged that the suspects usually 'camped' their clients who threaten to expose them when they failed to perform what they promise to do for them.

Some of the victims reportedly managed to escape and filed complaints at the police station at Adeiso, but the suspects were never arrested and questioned.

The police upon arresting the suspects marched them to the spots where they suspected the remains had been buried, and the suspects allegedly pointed to those spots for the bodies to be exhumed.

At around 11:00am on Thursday, the police used an excavator to dig the graveyard and also pulled down the walls of the shrine before exhuming fresh human skulls and plenty of bones.

The exhumation exercise ended around 4pm.

There are wild rumours in the village that a certain Kwashie Zormelo (age unknown) from Kasoa may have also been murdered by the suspects.

DAILY GUIDE understands the CID will be addressing the media on the matter at 2pm today.