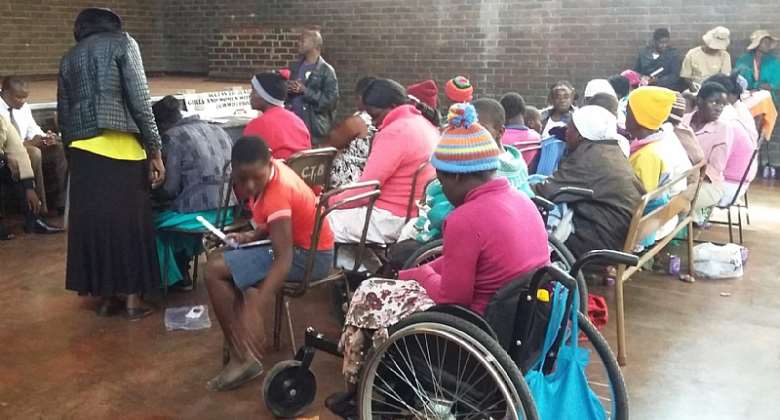 Perfection is doing things with a high degree of exceptionality so as to achieve an uncommon result. It is the price of persistence and perseverance that led Zimbabwe to its defining moment on the 18th of April 1980.

The conquest of the second chimurenga which began in 1964 leading up to 1979 became a remarkable force to reckon with. What was evident amongst Zimbabwean citizens was the fact that the end to white colonial rule would usher them into a transformational era premised upon political, economical and social freedom.

Freedom from colonialists was attainable, it was a matter of time before achieving such a thunderous victory but what remains mind-boggling is if at all citizens can be free in a liberated country?

They say life begins at forty but the inquiry whenceforth should be whether Zimbabwe’s 40th anniversary marks a step towards total emancipation or its a continued phase of stagnation, relegation and deliberate exclusion of persons with disabilities (PWDs) who continue to be an afterthought as they experience second class citizen treatment.

Twelve years after independence, the country had the first-ever promulgated Act for the disabled known as the “Disabled Persons Act” of 1992. Being a milestone, the document looked at empowering PWDs through enforcement of rights, provision of welfare, rehabilitation, establishment of a national disability board and the office of the director for disability affairs.

It further went on to address issues to do with discrimination, accessibility to services and buildings as well as employment. To date discrimination remains a breeding ground in the disability fraternity in relation to employment of PWDs and access to services all triggered by attitudinal behaviours and environmental barriers which are disabling.

Though efforts have been put in place by local council and municipality authorities to ensure that all newly constructed buildings are accessible as that is their policy. However, a number of those constructed pre and post-independence were designed to accommodate a certain group of people yet excluding the other.

This is largely attributed to government’s unwillingness to take a leading role in issues of accessibility. Section 7 (a) and (b) of the Disabled Persons Act clearly states that the national disability board cannot serve an adjustment order for state-owned buildings to be adjusted unless after having consulted the relevant minister.

Despite having a pool of PWDs with requisite skills, knowledge and abilities, and with potential to redefine the labour market and set a high benchmark, the prospect of ever getting employed is second to non. Though the country’s unemployment rate skyrocketed just above 92%, for the population of PWDs only 2% is employed in the public sector as stated in a 2014 report by NASCOH.

This leaves the rest to live denigrating lives as destitute thereby shuttering and fragmenting those hopes and dreams of a bright and sustainable future. This has characterised lives of PWDs to be that of poverty as they cry in despair for their total emancipation. Whatever they get is from hand to mouth.

It is after 39 years that the country had nationwide consultations to have a National Disability Policy in place and a process of repealing the Disabled Persons Act taken over by events to have a Persons with Disabilities Act.

Zimbabwe’s constitution-making process gave citizens another opportunity to amplify their voices leading to a procedure that would result in putting in place principles and laws supreme to the land. The Constitutional Parliamentary Committee (COPAC) began in 2010 and the constitution finally came into effect in the year 2013. In comparison to the 1979 constitution, the new one saw two PWDs included in the house of senate to represent this constituency as outlined under Section 120, although PWD’s call for representation in all the country’s provinces was loud and clear it fell on deaf ears.

Moreover, Section 22 and 83 focused on disability rights and a development centred approach to disability with a focus on a human rights-based perspective. Whereas the previous constitution mentioned little about disability and there was no recognition and inclusion of other clusters of people with disability. Only those with visual impairment and with physical impairment were recognised.

The approximate population of PWDs according to Inter Censtal Demographic Survey (ICDS) report of 2017 stands just over a million which is equivalent to 9%. However, there are only two representatives in the house of senate and non in the house of assembly.

Parliament being a platform to push people’s agenda, disability remains one of the worst marginalised community due to under-representation resulting in policies that are not inclusive development centred, failure to mainstream disability across all ministries as it is cross-cutting and multi dimensional. Notwithstanding selective gender-responsive services.

The convention on the Rights of Persons with Disabilities (CRPD) article 29 which Zimbabwe is a state party to and the African Charter on Democracy, Elections and Governance (ACDEG) under article 29 and 31, emphasise on self-representation through active participation in politics, public life and all decision making process on an equal basis and doing so effectively so as to ensure there is citizen urgency, transparency and democratic processes that serve all.

The second decade in the 21st century saw the Inclusive Education Policy coming into effect after the presidential accent early year 2020. The step in the right direction ensures that Children with Disabilities (CWDs) get the basic right to education which according to article 43 of (ACDEG) must be compulsory and free.

As such this approach to learning involves a CWD enrolling at the nearest school in the community where the child learns with other non-disabled children. The approach ensures that the child has a sense of belonging in the community, continues to develop within the environment he/she lives in and this affords all children an opportunity to learn, as local schools are cheaper as compared to special institutions.

Regardless of the policy coming into effect, statements such as “Subject to Availability of Resources”, give room for the government not to take its full responsibility of making institutions of learning a conducive place for PWDs. A significant number of schools in communities remain inaccessible from the classroom set up to the ablution blocks, there is an insignificant number of trained teachers in special education, yet those already trained are unemployed and the need for capacity building on policymakers to understand that inclusive education factors in house services that are integral to a CWD’s learning such as physio and occupational therapists and counsellors who all play a role in a child’s development. Approximately 52% of children have no access to education according to UNICEF.

As it is always the right time to do good, as such let no man wait for the right time to do good and so should Zimbabwe. The traditional independence celebrations give us as a nation a chance to reflect on our gains, where we went wrong and what more needs to be done. Moreso, the ideals of the liberation struggle continue to be like a burning flame to guide and lead us to a prosperous Zimbabwe where all have a sense of belonging and take pride in being her own.

This year marks another historical milestone and an opportunity to introspect, learn in order to unlearn certain things. Persons with disabilities potential remains immeasurable, unique and unmatched. Their capability is beyond contemplation however, what stands in between their ability to perform profoundly, and the realisation of their dream living in a liberated country is bondage.

Freedom for all will come if and only there is appreciation of the fact that disability is nothing but a difference to reveal the artistic human nature, diversity and the uniqueness each individual poses to create a Zimbabwe so rare and admirable. Together we can.

Hottest Photo Reports
Catch up with all the political quotes from our politicians.
Advertise here
More Article
ModernGhana Links
Thoughts Of A Nima Boy: A Break From The Past, Jariya Yussif Writes
Rejected And Approaved: Is Our Democracy In Crisis? Some Political Marketing Perspectives
Disinformation: An Emerging Threat to Ending AIDS in Ghana
Abolish 1999 Constitution, Implement #endsars Reports For Peace To Reign
Road of Death: Would the Ghanaian Parliament pass on an opportunity to fix the Accra–Kumasi Highway?
The Argument About Which Teacher Union Was Formed First
Turkey And Bangladesh Can Benefit from Growing Trade and Strategic Ties
National Science And Maths Quiz (NSMQ): The Bigger Picture
Why Ghana needs robotics industry for national development
TOP STORIES