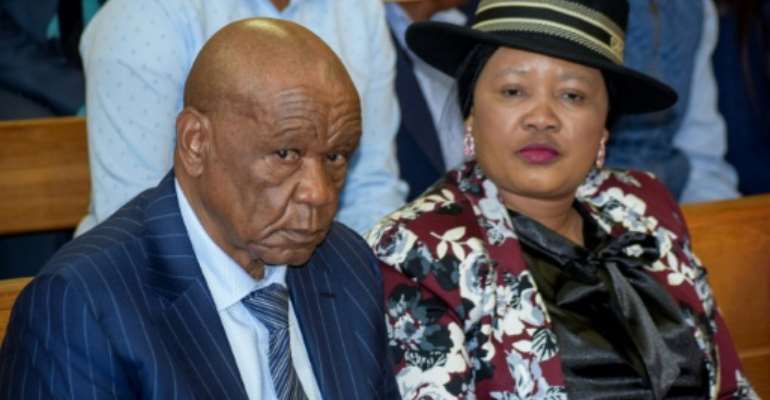 Lesotho PM Tom Thabane is under pressure to resign over the murder of his estranged wife -- his current wife, pictured, has been charged. By MOLISE MOLISE (AFP/File)

The Senate of the mountain kingdom of Lesotho amended the constitution on Tuesday, capping the prime minister's powers to dissolve parliament and call fresh elections, as pressure for his resignation mounts.

The country's opposition and even rivals within his ruling party are calling on Prime Minister Thomas Thabane to step down over suspicions he had a hand in the murder of his estranged wife in 2017.

Police have charged his current wife, first lady Maesaiah Thabane, with the murder of his previous wife Lipolelo Thabane.

The couple was involved in bitter divorce proceedings when Lipolelo was gunned down outside her home in Lesotho's capital Maseru in June 2017, two days before her husband's inauguration.

Despite vowing to step down in July due to old age, the 80-year-old premier has fought tooth-and-nail to stay in power.

In March he suspended the parliament for three months shortly after the lower house National Assembly passed a bill barring him from calling fresh elections if he loses a looming no-confidence vote.

However last month the country's constitutional court overturned his decision.

On April 18 the premier sent troops onto the streets of the capital Maseru for a day to "restore order", accusing unnamed law enforcement agencies of undermining democracy.

Many pundits have predicted that Thabane's next move will be to advise King Letsie III to dissolve parliament, which the law allows.

But the latest constitutional amendments prohibit current and future premiers from advising the king to dissolve parliament unless a majority of legislators support the move.

The new amendments passed by the 33-member Senate seek to limit the power of prime ministers while giving parliament a more meaningful role in its own dissolution.

"What happens now is for the amendment to be taken to the Speaker of the National Assembly who will then pass it on to His Majesty for endorsement as a law," explained Advocate Lekhetho Rakuoane, the leader of the opposition Popular Front for Democracy and mover of the amendment.

Before being debated in the Senate, 93 legislators of the 120-member National Assembly voted for the bill.

It also provides a mechanism for the appointment of a new prime minister should they die or resign unexpectedly.

Lesotho, which is ringed by South Africa, has a long history of political turmoil.

It has been more than a decade since a prime minister served out a full five-year term in the country, which is completely landlocked by South Africa.