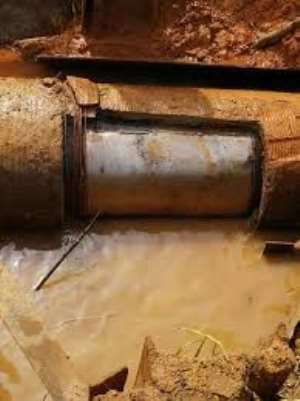 The Liberian civil war was one of Africa's bloodiest from 1989-2003. It claimed the lives of more than 250,000 Liberians and further displaced a million others into refugee camps in neighboring countries. The civil war destroyed a once-viable economic infrastructure and the Liberia Water and Sewer Corporation (LWSC) was one of those major economic infrastructures that were destroyed by the 14 years of civil unrest. The role of the Corporation is to construct, install, establish, operate, manage and supply safe drinking water and perform all sewerage services, as well as to maintain such water and sewerage facilities to all parts of Liberia. However, due to urban migration, and low investment by National government, the Liberia Water and Sewer Corporation (LWSC) is being faced with enormous challenges which has led to a dilapidated drainage system and clogged sewage network, causing flooding during the rainy season and creating breeding grounds for mosquitoes and other disease carriers. This means, the frequent flooding poses environmental threat to residents of Monrovia, as flood water mixes with and carries waste found in swamps that are often on the verge of residential areas. Furthermore, its stench fills the air like an early morning dew, releasing thousands, if not millions, of germs into the air.

In addition, for those selling and doing business nearby, they are no longer holding their noses, they have become accustomed to it. People waiting along the roadside to cross the streets are often left at the mercy of speeding drivers whose tyres splash water of human feces on their body parts and sometimes in their faces . As a result of this spillage of human feces on the street corners of Monrovia, there continues to be a rise of common illnesses such as malaria, cholera, diarrhea, and typhoid fever. The sewage is overfilled and virtually nothing is happening to suck it in, so to speak.

Liberians cannot have water free of contaminants when the pipes which run alongside the sewer line are always clogged. How disastrous it would be if a water pipe and a sewer line burst in the same area. The attendant would be waterborne illnesses which would take a longer time to find its source.Nearly everywhere in Central Monrovia is falling prey.

This however involves an adequate sewage treatment plant and drainage system for which contaminants will be removed from Wastewater or sewage and converted into an effluent that can be returned to the water cycle with minimum impact on the environment, or directly reused.

In the absence of adequate sewage treatment plant and drainage system, this poses potential environmental threat to residents of Monrovia if not properly managed.

The by-products from wastewater treatment plants, such as screenings, grit and sewage sludge may also be treated in a wastewater treatment plant. However, the current economy of Liberia is extremely underdeveloped, largely due to the 14 years of civil war making one of the poorest and least developed countries in the world with a GDP Per Capita to be 703.826 USD in Dec 2019 as reported by International Monetary Fund - World Economic Outlook and with a recorded increase from the last reported number of 727.800 USD in Dec 2018.

With such a terrible economy, the government of Liberia cannot afford to construct and maintain a costly sewage treatment plants using a technology that incurs expenditure of resource (i.e. Electricity, Chemicals etc.). This means, they need more options for sewage treatment at low cost. In both developed and developing world, at least for new developments, centralized sewage treatment system may not fulfill sustainable Wastewater management requirements in future due to ever-increasing demand. The most suitable wastewater treatment technique to be applied must meet the recommended microbiological and chemical quality guidelines at low cost, least operational and maintenance requirements. Adopting a low level of treatment as possible is needed in developing countries, not only from the point of view of cost but also in acknowledgement of the difficulty of operating complex systems reliably.

Vermifiltration technology which uses epigeic earthworms as a means of treating wastewater that is ‘economically viable’, ‘environmentally sustainable’ and ‘socially acceptable’ combines all these virtues together. Vermifiltration system of sewage is a low cost, low energy dependent , odorless, non-labor-intensive that has distinct advantage. The resulting vermi-filtered water is clean and disinfected enough to be reused for farms irrigation, in parks and gardens. During vermifiltration, there is no sludge formation in the vermireactor, which requires additional expenditure on landfill disposal; instead a vermicomposting, which is a bio-fertilizer, is formed. It should be noted that Vermifiltration also removes heavy metals, solid and liquid organic waste in the wastewater through the action of earthworms and various earthworm species have been used in vermifiltration of municipal wastewater.

Notwithstanding, the reuse of treated sewage water often raises public concern, especially because of the existence of real or perceived health and environmental risks. Therefore, the social acceptance of this practice becomes particularly important. Varying degrees of public reluctance to reuse treated sewage water have been reported. Willingness to use (treated) wastewater in agriculture and willingness to pay for crops grown with recycled water depend on several underlying factors such as awareness of present or future water scarcity, educational level, costs and benefits, magnitude of [real or perceived] health risks, aesthetic attributes of the water, and even religious issues. Direct or indirect potable reuse, which can be achieved via methods such as aquifer storage and other types of reservoir augmentation, usually face strong opposition due to the increased likelihood of human contact with wastewater. However, as suggested by Ching and Yu, the social construction of water reuse by the mass media, in other words the way in which the media portrays, positively or negatively, the “yuck” factor, might be even more significant than public opinion itself. Therefore, despite the fact that public acceptance (or rejection) of reclaimed water has often been a critical factor for the feasibility of several projects, public opinion can be reshaped when governments take an active role in communicating accurate scientific facts and making a persuasive case for water reuse initiatives.

Taking everything into account, the conventional biological wastewater treatment systems ( the ‘Activated Sludge Process,’ ‘Trickling Filters,’ and ‘Rotating Biological Contactors’ ) which are highly energy intensive, costly to install and operate, and do not generate any income is not suitable for a country like Liberia whose current economy is extremely underdeveloped and where much investment hasn’t been placed in this sector by National government in the midst of potential environmental threat to residents of Monrovia.

The vermifiltration has proven to be a cost-effective technology in the wastewater treatment sector. It is worth exploring more in order to show its adaptability to the Liberian climate and economic environment. In the vermifilter process there is 100% capture of organic materials, the capital and operating costs are less, and there is high value-added end product (vermicompost). Lastly, the need for proper drainage system of Wastewater needs to be acknowledged for the reduction of the risks associated to Waterborne diseases that are threat to human existence.

About the Author:
Gardawheh Gad Boe is a Geologist and an Environmentalist currently occupying the position as an environmental intern at Environment, Health and Safety Lab in Casablanca, Morocco. You can contact me via email: [email protected]