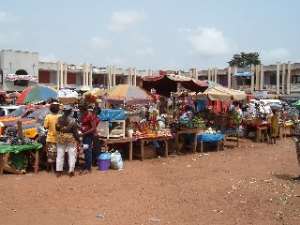 Dodowa Market in the Shai-Osudoku District of the Greater Accra Region has been shut down by authorities of the district assembly for a period of one week for refusal to observe the social distance protocols.

The motive for the closure of the market by authorities of the District Assembly comes following the refusal of traders to observe the mandatory social distancing protocols that was charged by the assembly as part of measures to forestall the spread of the deadly pandemic.

Dodowa market is one of the busiest trading centers in the Shai-Osudoku Municipality; Mondays and Thursdays are market days in the area.

According to Ms. Cornelia Asante, the Information Officer of the Shai-Osudoku District Assembly, regardless of the fact that traders of the market women were adhering to the shift system issued previously to decongest the market off any calamity, their failure to observe protocols hence resulted in the shutdown.

Following this, activities at the market have frozen since Monday, April 20 as those selling perishable goods have now been sent to trade their stuff at the Ghanata School Park.

However, authorities of the Assembly have noted that there will be meetings between the District Committee and Executives of the market women to have a second thought of an alternative to serve the best interest of the people in this difficult moment.

Meanwhile, traders are ‘infuriated’ labelling the authorities' decision as unfair and are calling for the reversal of their order.