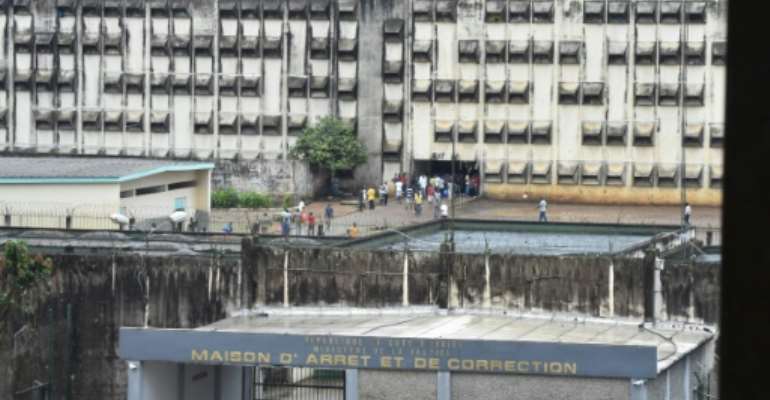 Overcrowded prisons are well-known targets for coronavirus. Abidjan's main prison, designed for 1,500 inmates, has a population of 7,000. By SIA KAMBOU (AFP)

Ivory Coast is rushing to shield its overcrowded jails from highly contagious coronavirus, with a plan to free hundreds of inmates in a bid to stop the spread.

"We are praying to God that the virus doesn't get into the prison. We're afraid," said a guard, speaking on condition of anonymity. "It could be a disaster."

The country is the latest state in Africa, along with Burkina Faso, Niger, South Africa and Ethiopia, to follow recommendations by the UN's high commissioner for human rights, Michelle Bachelet, to release prisoners to avoid a viral chain reaction.

Two thousand prisoners who are close to the end of their term or jailed for minor offences have already been identified for release.

Even so, this only slightly eases the pressure in Ivory Coast's packed penitentiaries.

"Once the virus arrives in a prison, it becomes very, very difficult to manage," said Steven Ako Tanga, local coordinator of the International Committee of the Red Cross (ICRC).

"We have to keep COVID-19 out of Ivorian prisons at all costs," the head of the country's penitentiary service, Boubakar Coulibaly, said, adding that lack of jail staff as well as overcrowding was a major problem.

The Red Cross has pitched in to help Ivory Coast's cash-strapped jails prepare for coronavirus. By ISSOUF SANOGO (AFP)

By global standards, Ivory Coast has been relatively unaffected by coronavirus, notching up 654 cases, six of them fatal, as of Wednesday.

But the experience of other countries and of stranded cruise ships has given the world a bitter lesson: the novel microbe can spread like wildfire in confined conditions.

Coulibaly insisted that there had not been a single case in Ivorian jails.

"We haven't skimped on resources," he said, ticking off a list of measures.

They include a ban on prison visits, a 15-day lockdown for new detainees, setting up special quarantine cells and training exercises for handling infected prisoners.

The ICRC is sending out 11 trucks to prisons around the country to distribute soap, bleach and hand sanitising facilities.

"The goal is to cover all prisons as soon as possible," said Ako Tanga.

He called for better social distancing, pointing to crowds who gather at prison gates.

In Abidjan's main prison, universally known as MACA from its acronym in French, one of the two physicians, Dr Mathurin Kouassi, said, "We are not worried, because we are taking every possible measure not to be contaminated."

Pierre Irie, of the biggest trade union representing prison staff, acknowledged that the bosses had moved "quickly and in the right direction" but pointed to a lack of resources.

A man washes his hands at the entrance to Abidjan's main prison. By ISSOUF SANOGO (AFP)

"Look, most of the prison guards are having to wear home-made masks," he said.

"Who isn't afraid?" he asked. "There is anxiety at every level. We are in a context of overcrowding in an enclosed space."

At night, prisoners sleep in crowded cells, he said. The guidelines are for "social distancing of one metre (3.25 feet) -- can we do that?" he asked.

The virus can linger on surfaces, he said, noting food packages that arrived from prisoner's relatives.