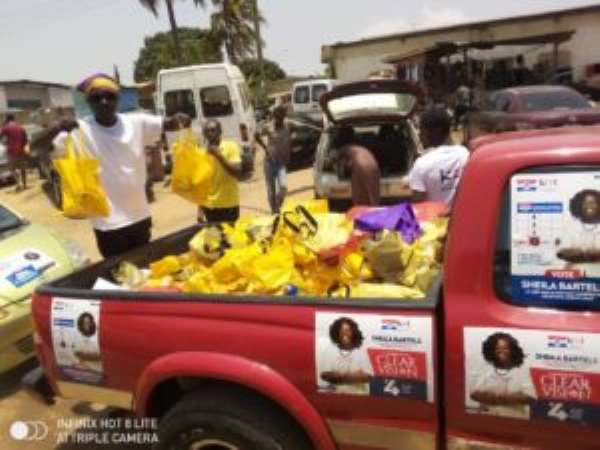 Aspiring Parliamentary candidate for Ablekuma North on the ticket of New Patriotic Party (NPP) Ms. Sheila Bartels has donated bags of rice, cooking oil, Gari, Corned Beef and some cash tokens as a relief package to support other members of her party in the Ablekuma North Constituency.

Her donation comes in the wake of the announcement made by the first Gentleman of the land Nana Addo Dankwa Akufo-Addo for the lockdown. The announcement was made by the President on Friday night as part of the measures to help combat COVID 19 away from Ghana.

The elated beneficiaries expressed their gratitude for the kind gesture of Ms. Sheila Bartels.

"We are grateful to Ms. Sheila Bartels for the kind Gesture indeed she is a leader and we are sure she will be voted as our parliamentary candidate during the upcoming party primary".

Sheila Bartels is number 4 on the ballot paper for the upcoming primary having successfully sailed through her vetting.

"I'm coming to rescue Ablekuma North and this mission cannot be done myself alone I will need their support and prayers to succeed". Ms. Bartels added.

Sheila also used the opportunity to educate the beneficiaries on COVID 19, and why it is necessary to combat it using the directives recommended by the President, especially handwashing.

Sheila is an emerging and fast-rising politician from the Ablekuma North Constituency.

Born into a strong NPP tradition with her father being the former NPP MP and minister of state, Hon. Kwamena Essilfie Bartels, Sheila’s biggest contribution to the NPP fraternity is the formation of an independent volunteer campaign organization known as The HOPE Campaign.

HOPE was instrumental in ensuring that the electorates, especially the youth, understood and could identify with the NPP campaign message for 2016 and this is indicative in the margin of the victory won in 2016.

WHO IS SHEILA BARTELS?

Sheila Bartels is an Entrepreneur since 1998, with business interests in E-commerce, Financial technology, Oil and Gas and Business Development. One of her businesses, InCharge Global Limited manages digital financial service agents nationwide on behalf of banks and other financial institutions like Ecobank and GhiPSS.

Another venture she owns is Betorbi.com, an E-commerce and consulting firm, specializing in developing and promoting Made in Ghana products internationally and supporting business owners to achieve business growth.

She also represents a Turkish manufacturer of fuel transportation and storage equipment.

We will not hesitate to proceed on strike on Monday if deman...
19 minutes ago

Treason trial: Bomb the ministry for transmission to go off ...
35 minutes ago