Journalism In Ghana, Our Achilles Heel 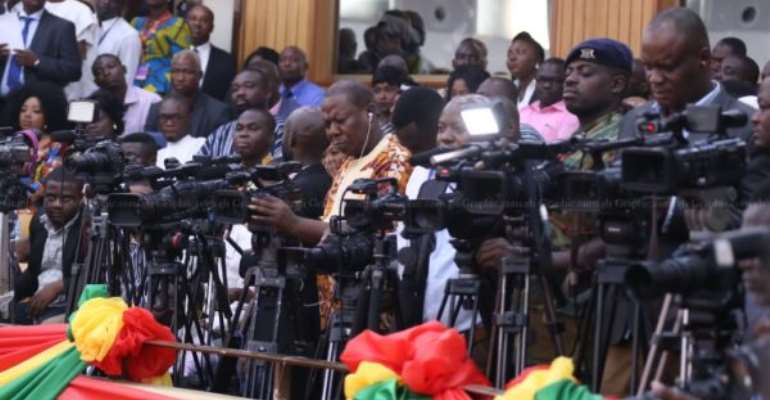 The standard of journalism in Ghana was appreciably high until some political gurus began to set up their own media platforms when it began to fall to a point of no return and today there is relatively nothing to write home about Ghana’s journalism. Most of the journalist working in media houses belonging to political gurus, for the fear of losing their jobs, have no option than to satisfy their paymasters in their presentations on the various media platforms to have their jobs secured. It’s disheartening and inappropriate looking at the way and manner some journalist have adopted their own way of presenting and writing issues in the electronic and print media to paint people with integrity black to the advantage of their Political mogul.

As a concerned citizen and a journalist it would be insensitive on my part if I sit down unconcern for some journalist to ruin Ghana’s journalism without expressing my dissatisfaction on the way and manner some of them discharge their duties in recent past have forgotten the fact that journalists are like a mirror to the good people of Ghana and for that matter they must be circumspect in their reportage as whatever they say or write incites their listeners, viewers and readers. To the best of my knowledge, the prime objective of a journalist is to inform, educate and entertain thereby contributing to amalgamation of societal peace. Any iota of phrase meant to deceit is crucial to societal disintegration.

It is imperative for our journalist to use their weapon properly that is a warrant of truth in discharging their duties to the good citizens of Ghana. News by journalist on media platforms spread faster than messages preached by ministers of the gospel on pulpit and crusade grounds and as such journalist must do thorough investigations on reports they receive from all quarters before they bring it out for public consumption. A journalist must make sure truth outweighs lies in their chosen profession. Even at the point of death or in the lion’s den they must hold forth the banner of truth. If the above definition of journalism is accepted by all and sundry then some journalists do not qualify to be called journalist because they have deviated from what is required of them.

It is a pity! People who call themselves professional journalist who should be promoting Ghanaian journalism to the outside world are rather making this noble profession unattractive to the future generation. It beats my imagination to see some journalists who are supposed to preach a word of peace that will unite Ghanaians in their quest to satisfy their selfish interest will allow themselves to be used by some greedy politicians to say or write bad things about some important personalities of the nation who have toiled many years to build their reputation.

Some months ago there was a reportage on social media about the former EC Chairperson indicating her husband had sought permission to marry a second wife. Assuming without admitting that the report is true, is it wrong for a man to ask her lovely wife to give him green light to have a second wife? Even though polygamous marriages are illegal under civil law, though are arguably considered legal under customary law so I don’t see why a blogger would waste his/her time to publish such frivolous or needless news on social media. God have mercy on us because if we walk on assumption that what is accepted to be true is the real truth then we have a little hope to advance. To which destination is Ghanaian journalism heading?

The Christian scripture clearly says “we should be quicker to hear but slower to talk” and that tarnishing someone’s reputation to satisfy our selfish gains is evil, unfair and serious crime against humanity. Journalists who allow themselves to be used by some politicians to tarnish other people’s image should put themselves in the shoes of those people and see how hot it is for your name to be put in the mud. Those who open their doors for some Politicians to use them must remember power can change hands at any point in time. The Holy Bible says, in proverbs 19 verse 5, “A false witness will not go unpunished, and he who pours out lies will not go free. Proverbs 13 verse 10-11 clearly says “pride only breeds quarrels, but wisdom is found in those who take advice.”

It’s worrisome to see some journalist in their quest to enrich themselves deliberately set their victims up into taking bribes so that they can capture them on tape and later claim a huge ransom from them, their victims. If their demands are not met, they try to bring their victims down to cause their exit in high positions they occupy in government and other sectors. Dishonest money dwindles away, but he who gathers money little by little makes it grow. It is pathetic most of our journalist in recent past take delight in falsehood rather than truth because of where they are coming from and the money they will get into their pockets. The Holy Bible says, in Proverb 22 verse 1-4 that is “A good name is more desirable than great riches, to be esteemed is better than silver or gold, rich and poor have this in common: The Lord is the maker of them all. “A prudent man sees danger and takes refuge but the simple keep going and suffer for it.

Our Political affiliations blind us that is why some journalist take delight in denting people’s image and they find themselves in prison and their paymasters will be home enjoying life with their families. Humility and the fear of the Lord bring wealth, honour and life.” and as such we must try as much as possible to discharge our duties in accordance with the code and ethics of our chosen profession so that the future generation will have enthusiasm in journalism. It’s pathetic to see some of our journalists exhibiting journalism of lies and exaggeration. The way and manner some journalist go about their duties could lead our beloved and only country in disarray.

The Holy Bible says in Proverbs 17 verse 19 “he who loves quarrel loves sin: he who builds a high gate invites destruction. It is a pity to see people who should make sure peace and unity prevails in our society give their platforms to some greedy politicians to use tribal politics to gain political points as one party hates a particular tribe. It is surprising to know that when their political leaders are in the reins of government whatever they do is good and perfect but that of their political opponents is the opposite.

Undoubtedly, journalists have played a major role in our country’s democracy but they have also failed to use a strong weapon which is objective criticism meant to strengthen and straighten our Politicians to help move our nation forward. The scripture clearly says in Proverbs 16 verse 24-29 “pleasant words are a honeycomb sweet to the soul and healing to the bones. The labourer’s appetite works for him: his hunger drives him on. A scoundrel plots evil, and his speech is like a scorching fire. A perverse man stirs up dissension and a gossip separates close friends. A violent man entices his neighbour and leads him down a path that is not good. The tongue has power of life and death, and those who love it will eat its fruits. There is an adage which says “if you throw a ball on a wall it bounces back unto you”.

In recent past some journalist who host programs on radio and television allow serial callers to use their medium to say all sorts of lies and rain insults on our opinion and political leaders because of their political affiliations. They know very well the words these serial callers use on their platforms are not good for public consumption but will not stop them because they feel those harsh words they use makes their programmes very hot and attractive to the listening public. If care is not taken some journalist will plunge our beloved country in disarray.

In the light of the above heart- beating problems I am appealing to the Ghana Journalist Association (GJA) and Ghana Media Commission authorities to organize frequent refresher courses to our journalist to enable them discharge their duties diligently to meet the expectations of well-meaning Ghanaians. I would like to take this little opportunity to commend journalists who have decided to hold the banner of truth to diligently serve the good people of Ghana without fear or favour to create good name for journalism in Ghana.

‘Tweaa’ there is no power in the bible; it only contains his...
21 minutes ago