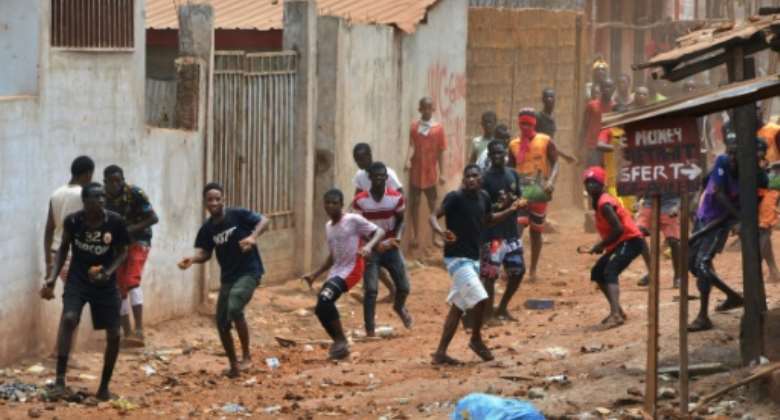 At least 10 people were killed in clashes Sunday between police and protesters, opposition activists said, as Guinea held a bitterly disputed referendum that critics say is a ploy by the president to stay in power.

Anti-government forces came under fire by security forces who "carried out massive arrests, fired blindly, cruelly molested (and) killed at least 10 people," the FNDC, an umbrella opposition group, said in a statement.

The authorities could not immediately be reached to confirm the casualty toll.

Alpha Conde, who became the West African country's first democratically elected president in 2010, is proposing a change to the constitution to codify gender equality and introduce other social reforms.

Early Sunday young people attacked police deployed outside a polling station in a suburb of the capital Conakry, according to an AFP reporter and other witnesses. In another school nearby, voting equipment was vandalised.

A 28-year-old man was shot dead and several others wounded in another Conakry suburb, Hamdallaye, the victim's brother confirmed to AFP. Officials did not respond to AFP's requests to confirm the death.

Clashes also broke out in other Conakry suburbs and elsewhere in the country, a former French colony.

Since October, Guineans have protested en masse against the possibility of Conde extending his grip on power.

Critics questioned the fairness of Sunday's vote, which took place amid mounting concern about the spread of the novel coronavirus in Africa, including two cases officially reported in Guinea.

The government says it has scrubbed the problematic names on the urging of an expert team from the West African bloc ECOWAS.

Cellou Diallo, a former premier and the head of the leading UFDG opposition party, said the process of cleaning up the electoral roll had been opaque.

The UFDG and other opposition parties are boycotting both the referendum and a parliamentary election taking place at the same time.

Since voters returned him to office in 2015 for his second and final five-year term under the current constitution, critics say he has become increasingly authoritarian.

The draft constitution would limit presidential terms to two but extend the length of the term to six years, potentially enabling Conde to govern for another 12 years.

The government argues that the new constitution would usher in sorely needed changes in this conservative country, especially for women.