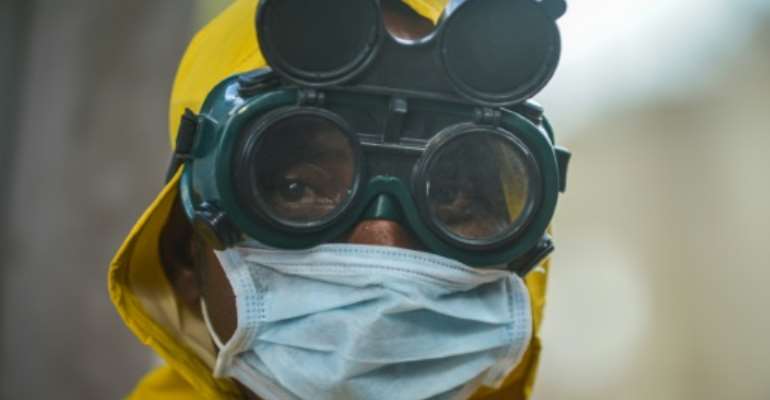 Ethiopia got a batch of equipment from Chinese billionaire Jack Ma. By Michael Tewelde (AFP)

Rwanda went into shutdown on Sunday, imposing some of the strictest coronavirus measures in Africa where infections are rising fast and hospitals ill-equipped to cope.

The central African nation banned all "unnecessary movements", mirroring steps by governments from the Indian Ocean nation of Mauritius to Burkina Faso on the fringes of the Sahara who have banned public gatherings, shuttered schools, churches, mosques and bars and closed their airports.

After lagging behind the global curve for coronavirus infections and deaths, Africa has seen sudden rise in cases over recent days.

The Democratic Republic of Congo on Saturday reported its first death from COVID-19, taking the sub-saharan African toll to six after Burkina Faso, Gabon and Mauritius previously reported fatalities.

Eritrea, Uganda and Angola have joined the growing list of African nations to confirm their first cases, while Tanzania, Ethiopia and Mauritius announced more cases Sunday.

The continent has now reported more than 1,100 infections -- more than 1,000 of them in sub-Saharan Africa -- as the World Health Organization expresses concern that poor sanitation, urban crowding and the lack of intensive-care units, equipment and trained staff could hamper any response.

Streets were mostly deserted in central Kigali as Rwanda went into total lockdown after reporting 17 confirmed cases, the highest number in East Africa.

"Unnecessary movements and visits outside the home are not permitted," the government announced in a statement late Saturday, excusing trips for healthcare, food, or banking.

Shops were shuttered in Kigali, bus stations empty and the capital's main market -- usually bustling on a Sunday -- eerily quiet. Some other trading centres, however, saw a rush as Rwandans stockpiled food, anticipating a long wait indoors.

No more 'unncessary movements' in Rwanda. By MARCO LONGARI (AFP/File)

Rwanda is closing its borders completely, except for goods and cargo and returning citizens, authorities said. Anyone arriving in Rwanda will be subject to a 14-day quarantine at designated locations.

The restrictions in the tiny landlocked nation are among the toughest on the continent.

But neighbouring Uganda also threw up its borders late Saturday, with Ugandan President Yoweri Museveni saying all but emergency flights would not be permitted to land.

"We will not take any more incoming passengers," he declared.

Mauritius -- some 1,800 kilometres (1,100 miles) off the eastern coast of Africa -- was the first in Africa to impose a total lockdown, which entered its third day Sunday.

Port Louis, the capital, was empty of weekend pedestrians, after authorities there took measures to curb the virus, which has killed one and infected 17 others in the Indian Ocean archipelago heavily reliant on tourism.

The figures for Africa are just a fraction of the more than 300,000 confirmed infections worldwide and the more than 13,000 dead.

Africa's most populated country Nigeria announced a tightening of restrictions on its 200 million people, with churches, mosques, social gatherings, football viewing centres and night clubs only permitted to host up to up to 50 people in some states.

In West Africa, the outbreak has resurrected memories of the 2014 Ebola outbreak that left more than 11,000 dead.

Despite fears over the virus, Guineans went to the polls Sunday to vote in a divisive referendum on whether to adopt a new constitution that has sparked months of protests.

In neighbouring Senegal, which has almost 60 confirmed infections, the government said Saturday it would show "no tolerance" for those found breaking restrictions -- including a ban on public prayers in mosques put in place to combat the pandemic.

On Friday, Zimbabwe announced its first COVID-19 case at Victoria Falls, a resort town. That was followed on Saturday by news of the first case in the capital Harare.

In South Africa -- the continent's largest economy -- Health Minister Zweli Mkhize said last week that infections "ultimately can affect up to 60 percent of the population."

A 2016 analysis by the Rand Corporation, a US think-tank, found that of the 25 countries in the world that were most vulnerable to infectious outbreaks, 22 were in Africa -- the others were Afghanistan, Yemen and Haiti.

The report identified a "disease hotspot belt" extending across the southern rim of the Sahara through the Sahel to the Horn of Africa, where many countries are struggling with conflicts.