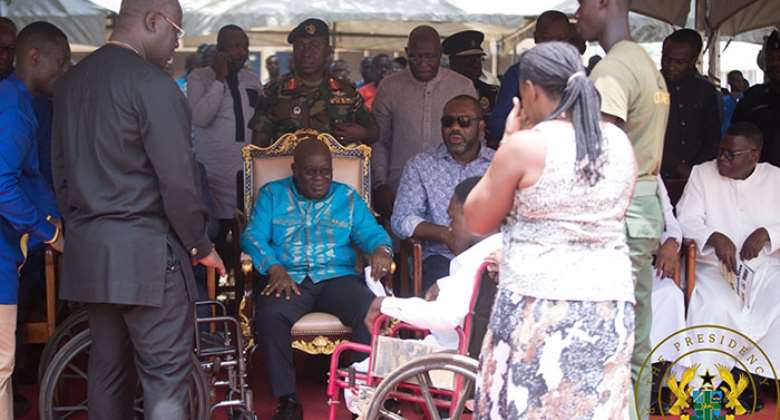 President Akufo-Addo having a hearty chat with the disabled student

President Akufo-Addo paid a surprise visit to the campus of Opoku Ware School (OWASS) in Kumasi on Saturday to grace the 68th annual Speech and Prize-Giving Day of the school.

The President spent the weekend in Kumasi after he had attended the 63rd Independence Day anniversary parade at the Baba Yara Sports Stadium the previous day (Friday) and decided to join OWASS to mark the big event.

Accompanied by the Education Minister, Dr. Matthew Opoku Prempeh, the President was accorded a rousing welcome to the school.

DAILY GUIDE understands that the authorities of OWASS were planning to organize a bigger occasion when the school turns 70 and wanted to keep the 68th anniversary on a low profile but the surprise presence of the President turned it into a much bigger occasion.

In his address, President Akufo-Addo gave an assurance that his government was currently working harder to improve the infrastructural base of the various senior high schools in order to boost teaching and learning.

For instance, he announced that a 12-unit classroom block project had been completed at OWASS, adding that a total of 1,500 tables and chairs had also been presented to the school to boost academic work.

According to the President, construction work on a three-storey dormitory project is currently ongoing at OWASS, adding that his administration has the desire to make education flourish at all stages.

In the course of the programme, a Form One student of OWASS, who was born disabled and comes from a deprived background, was introduced to the President, who was excited to see him and encouraged the boy to study harder.

It was revealed that the boy had aggregate 8 during last year's BECE and he was placed in his first choice school of OWASS. The boy, who sits in a wheelchair, chatted directly with the President.

Later on, the President presented a new wheelchair and an undisclosed amount of money, on behalf of an old boy of OWASS, to the student, whose mother was seen shedding tears of joy.

At the tail end of the programme, the school authorities conferred an old boy (Katakyie) status on President Akufo-Addo with a school number i2. In 2015, OWASS conferred a similar status on ex-President Kufuor.