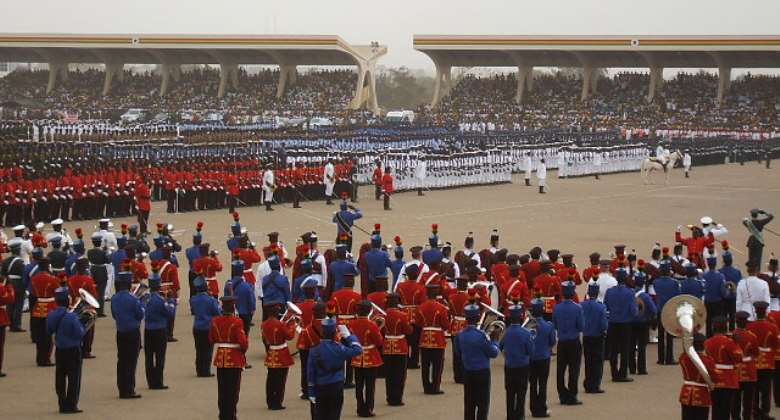 Growing up as a young man, I have always been a privilege to be on the frontline for 6th March. I remember vividly in 1996 when I was in primary 4 my first independence 6th March experience is still fresh in my memory. I had a white shoe and a nice 'Tea and Bread uniform’. I was stood behind to the leader of my school boys parade. I hardly sleep at night, because the excitement and euphoria surrounding the opportunity to be part of a team to match were great. I wake up down and engaged in personal rehearsal.

We were taught of patriotic songs and had weeks of intensive training to commemorate the Match pass on the independence day- 6th March. It has become a yearly ritual until I completed Senior High school. It was always full of joy and enthusiasm to be part of these occasions. My elder Sister and Father of blessed memory always make it to the Bawku Community center to Watch us Match in commemoration of Ghana’s independence day.

Haven studied History and Government as academic enterprise as well as reading more on Ghana and Africa related politics, my in-depth understanding of Ghana’s road Map to independence; attainment and postcolonial dynamics was very sound. Ghana was often heralds in the news as the first sub- Saharan African country to attained independence. Until recently, Ghana was being adjudged the beacon of African democracy.

Sadly, the strong socio-economic foundation that has been laid by our founding President Osagyefo Dr. Kwame Nkrumah was short-lived as a result of CIA backed coup d' etat. While others have failed to acknowledge him as afore barrier in the struggle to Ghana's independence, the majority still credit Nkkrumah significant contributed and support the view that Nkrumah is synonymous to Ghana.

As a Youngman who is in his 30s, and did not live in the era of independence, I may not have the real feel of the era. However, a cursory assessment of events and current trend suggest that; our country Ghana is in a state of backwardness. The educated elites who have struggled to attained independence have another group that took power through their hands. Moreso since the return of constitutional rule a new set of elites emerged as the political class. The 21st century political and elite class in Ghana has become self-centered and the spirit of nationalism and patriotism is lost. The elite inherits political offices and loots the national coffers. What is more grieving has been that the custodian of our culture and customs have equally become more corrupt than we can imagine? After, 63 years of so-called political independence, Ghana has still not had the bargaining power in terms of the world economic order; because serious value addition has not been added to our raw materials.

It is a shame that we have abundant vast land, water resources and the only 'good' use of these natural resources is to franchise for mining without thinking of environmental consequences. In terms of education, the elite engineers and administrators cannot even comprehend practically what has been taught in the four corners of the class. One may wonder what would have happened if the informal class were not so good in practical works.

The future of Ghana looks gloomy as the only educated get the disappropriate share of the national cake and the politicians become ‘Tin gods’ and hijacked the system for their selfish gains. We cannot have a better country if young people go to school the only option is to belong to the political community. It is a day of shame to celebrate independence when our moral integrity is been control and directed by western powers. Our leaders are not strongly fighting the new evil 'gaysm' and the irony is why the white managed to convince as that polygamy is evil and gaysm is modernity and acceptable? The elite class has failed us and the future of Ghana’s youth is in danger. Of what use is knowledge gain if Ghanaian elites acquire academic skills and yet the country is in the state of retrogression.

Ethnocentrism, religious sentiments, greed, selfish desires, corruption, poverty, malnutrition, insecurity and the rising cost of living has become Ghana's identity. What is there to celebrate? Are we celebrating government officials flying and touring Europe while the ordinary Ghanaian cannot even get sandals to walk on? Are we celebrating mothers dying of maternal health as we lack adequate gynecologist? Are we celebrating young girls in Wa West District that are victims of sexual exploitation and becoming teenage mothers? Are we celebrating political actors for looting and building mansion?

With rising youth unemployment, poverty and institutional bottlenecks, I think commemorating independence (freedom) that is a mirage is not worth celebrating. Ghana's independence has become an avenue for some group of the elite to ‘cash in’ if not why will we continue to celebrate 'nothing' when suffering and frustration is the order of the day. Ghana might just learn some lessons from Tanzania president John Joseph Pombe Magufuli for diverting the budget allocation for independence celebrations to resource the nation's hospital with beds.

It is time for the Ghanaian youth to begin to hold the elite and political class responsible and accountable. The government must strive to ensure that the true state and meaning of independence is appreciated. We must re-instill the spirit of patriotism and nation-building and unite with a common course to free Ghana from elite capture. We can only achieve this if the Ghanaian youth arise for mother Ghana.