Demon Reveals Himself in Front of Millions During “Fight of the Decade”. 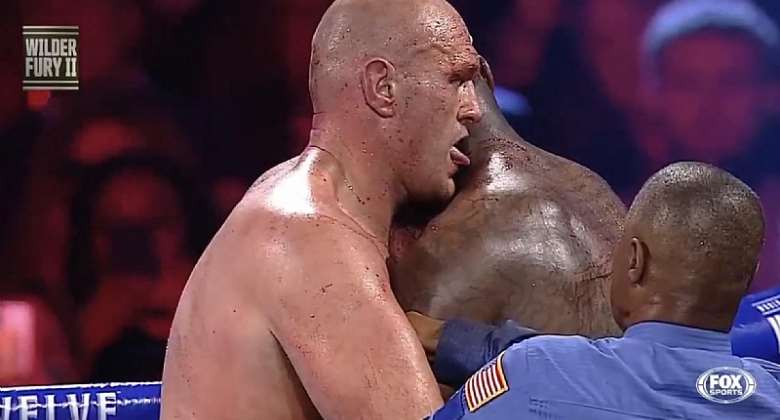 “In the fight of the decade” (Yes, it’s only February) we saw Tyson Fury in indescribable terms pummel Deontay Wilder to a pulp. Fury captured the WBC heavy weight title of the world from Wilder, and added that title to his lineal heavy weight championship belts. The highlight of the fight, which has gone viral is Fury tasting Wilder’s blood with his tongue. What many people are calling, gross, disgusting or writing off, as Fury being Fury; I want to exam in a spiritual context what I saw as a demon or spiritual entity revealing himself live on television in front of millions of people. During the sixth round of the “blood bath” of the decade while blood continued to profusely leak from Wilder’s ear onto his neck and shoulders, Fury leans in on Wilder’s shoulders then begins to rapidly in an almost sexual fashion tries and succeeds at licking blood off Wilders neck.

If you’re still with me, lets break this down more to give you a deeper understanding of what you may have witnessed Saturday night. Tyson Furry who’s from Wythenshawe, UK, nickname is the “Gypsy King”. Fury openly talks about being a born again Christian. However, we must acknowledge that in its most general and stereotypical terms Gypsys are traveling nomads who spiritual practices include the reading of crystal balls, and tarot cards. Gypsys are known to perform witchcraft, give blood sacrifices to spirits, cast spells both good and bad and perform various other forms of dark and light magic. In Ghana, you would call Gypsys Juju people. I am not saying Gypsys are bad people, or they all do witchcraft, or believe any of these things are necessarily evil. I just need to make clear, if you tell someone you are a gypsy, it is assumed that you are admitting or taking responsibility for performing and believing in the aforementioned spiritual practices. After Fury and Wilder I in 2018, they were laughable stories and rumors that Deonta Wilder claimed he felt “dark energy” during the fight coming from Fury. Many believed these were just excuses made to cover up a lack luster performance resulting in the draw decision in the epic first battle between Fury and Wilder. Fast forward to interviews leading up to the rematch Fury is quoted as saying “My god vs your god” insinuating it was Fury’s Christ being god vs

Wilder’s god who we will now discuss.

Deontay Wilder from Tuscaloosa, Alabama, whose nickname is the “Bronze Bomber”, says he has traced his heritage and is part Nigerian. Wilder is known as someone who believes in African spirituality. African spirituality is a broad term, but with that being said Wilder is no stranger to non-mainstream spiritual practices. Wilder is quoted as saying his African ancestors’ transforms him from Deontay Wilder into his alter ego the “Bronze Bomber” hence the nicknamename. I believe this belief in possession is what inspired Wilder’s ring entrée attire (above). It is my belief that Wilder is dressed as ancient African king from Nigeria. This king who Wilder believes he is channeling, turns Wilder into the “Bronze Bomber”.

In this fight where both fighter talked about their spiritual beliefs and both fighters have spiritual connections in the nicknames. At that moment in round six during the “massacre of the decade”, I believe we saw one spirits vessel tasting the blood of another spirit’s vessel. We witnessed spiritual warfare with our very own eyes. I do not know whether Wilder’s spirit or alter ego is demonic or not, as not all spirits are good and not all spirits are bad. I believe that the tasting of the blood was a tribute to Fury’s “god” and I believe that this god was not of Christian origin but of something else. I joked as I was writing this story saying Christians taste the body and blood of Christ, not the body and blood of Deontay Wilder.

In a society, where far too many people would only be convinced they saw a demon if wings came out of one of the fighters back and he flew away in front their eyes. Another version would be if one boxer had to rip the other boxer’s head off then hold the head in the air and drink the dripping blood. Too many people need that sought validation in order for them to acknowledge they saw. As people we have to learn how to recognize what’s hidden in plain sight. I could really write an extended essay on Saturday night’s scene, do the ancient research, and decode it all, but that is not my job, its someone else’s calling. In life, we hear terms such as spiritual warfare, spiritual warfare is not all based on human salvation. This could just be two spiritual entities at war for sport. People channel spirits all the time that has nothing to do with the humanity of the world. On the night of February 22nd 2020, I believe we had two boxers who were channeling spiritual entities and one of those entities made a public appearance which was a little too revealing for the world, and especially for those with a trained eye. On one of the biggest stages in the world the fight of the decade (had to say it one last time), with millions of viewers and hundreds of millions of dollars made all around, Tyson Fury gave his “god” a blood sacrifice. We saw on live television that “god” or what I call demon tasting the blood of its victim, and accepting that blood sacrifice.