Bigger Than Africa: Tales Of The Yoruba People 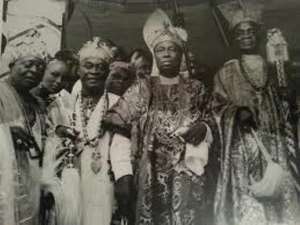 The Yoruba people, one of the largest ethnic groups in Africa, have survived for centuries on the African continent. Evidence points to a powerful Yoruba kingdom in the eighth century in Ile-Ife. They lived in well-structured urban centers organized around powerful city-states well before the arrival of the British colonizers.

With the onset of the Atlantic slave trade, Yoruba people from Nigeria and Benin were forcibly transported to America as slaves. Their religion expanded across many borders — to Trinidad, Cuba, Saint Lucia, Benin, Togo, Brazil, Guyana, Haiti, Jamaica, to name a few.

A new film Bigger than Africa captures how the descendants of one of the largest empires in West Africa before colonisation kept their traditions alive.

Toyin Ibrahim Adekeye, the Los Angeles filmmaker and director of the film Bigger than Africa traveled to six countries to examine contemporary practices of Yoruba culture. He pored over numerous videos and conducted face-to-face interviews with Africans and people of African descent steeped in Yoruba beliefs.

Rallying point
The film shows the Yorubas as among the last Africans to be captured and sent to the Americas and other places just before the slave trade came to an end.

“As a result, they were able to retain their culture, which became a rallying point for non-Yoruba freed slaves desperate to connect with their ancestors,” Mr. Adekeye told Africa Renewal at the screening of the documentary at UN Headquarters in New York. “They all gravitated toward the Yoruba culture. They became a community, one people in the diaspora.”

“To date,” he added, “the most pronounced African culture in the diaspora is Yoruba.”

Mr. Adekeye’s visit to Oyotunji Village in South Carolina in the United States triggered his interest in the production of Bigger than Africa. “Oyotunji” in Yoruba translates to “Oyo awakening.” His film, shot in six different countries (Benin, Brazil, Cuba, Nigeria, Trinidad and Tobago and the United States), and featuring interviews from around the world, follows the journey of these Africans from West Africa to their final destinations.

Many Yoruba monuments dot the six countries he visited, but the greatest manifestation of the Yoruba culture is the language and religious worship of the deities—Shango, the “Orisha” of thunder and lightning, Babalu-Aye, orisha of the Earth, Kokou, a violent worrier orisha, Obatala, creator of human bodies, orisha of light, Oko, orisha of agriculture, Ogun, orisha who presides over iron, fire, hunting, politics and war, among others. These were common denominators he found in all these countries.

Other references to the Yoruba faith can be seen in Trinidad and Tobago, where a belief system known as Trinidad Orisha and its adherents, known as “Shango Baptists” can be seen. Yoruba Village in Port of Spain is dedicated to Robert Antoine, the pioneer of free Africans who came to Trinidad. In Bahia, Brazil, known as the Yoruba Capital of the Americas, the faith in Yoruba deities is over 500 years old.

Mr. Adekeye even saw evidence of Yoruba influence in Lemonade, the sixth studio album by American singer Beyoncé, who performed the title piece at the 2017 Grammy Awards ceremony with flowing water around her. She was a depiction of “Osun, the Yoruba goddess of fertility, beauty and water,” Mr. Adekeye said.

Beyoncé channeled “Osun, the beloved Yoruba goddess… known to display human attributes such as vanity and jealousy,” corroborates music critic, Jenni Avins, in a piece for Quartz, a US publication.

Another Yoruba deity is said to be profiled in a much-talked about Disney project, called Sade. It is said to reference the deity Yemoja, although Disney has pitched it as a fairy tale princess.

Evolution
Despite its remarkable resilience, some aspects of the Yoruba language show signs of foreign influences — both at home in Western Nigeria, in Benin and in Yoruba communities in the diaspora, Mr. Adekeye acknowledged. “The language is not exactly the same. Due to the influence of local dialects, pronunciations of certain words differ country to country.”

Screenings of Bigger than Africa, including one at the United Nations headquarters in New York in October, are met with great interest by the audience. It is also accomplishing the producer’s objective — that it should become a conduit for the African diaspora to connect with Africa.

“African diasporas are making efforts to visit Africa and participate in local festivals. We can help each other,” Mr. Adekeye said, adding: “Growing up in Africa, we knew about slavery, but I think our knowledge stops at that point. We do not know what happened after the slave boats docked in the Americas, Cuba and the Caribbean. We need to fill the gaps.”

The UN General Assembly proclaimed 2015-2024 “The International Decade for People of African Descent” to recognise and promote the human rights of people of African descent.

In 2007 the UN declared 25 March of every year the “International Day of Remembrance of the Victims of Slavery and the Transatlantic Slave Trade.”

The screening took place in the context of those initiatives.

Mr. Adekeye says the message in his documentary aligns with that of the UN. “Our goal is to foster unity, promote human rights and highlight the work of people of African descent.”

More projects are in the pipeline, he hinted. “There is a lot to document and highlight.”