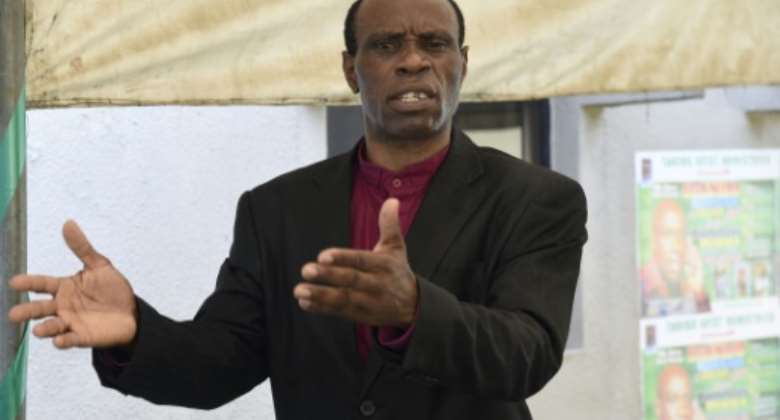 Former AC Milan and Inter Milan defender Taribo West is now a preacher in Nigeria and says corruption is killing football in his homeland. By PIUS UTOMI EKPEI (AFP)

In his playing heydey Taribo West was a tough-tackling defender taking on the best strikers in Italy's Serie A with his trademark shock of brightly-coloured braids.

Now the former Inter Milan and AC Milan player is one of several ex-Nigeria national team stars and officials on a crusade to stamp out the corruption eating away at the game in his West African homeland.

"Nigerian football is sinking, it's almost dead," West said as he took to the airwaves of a popular radio station in the capital Abuja.

"There's almost no place where you can talk out against those managing football because they have paid everybody."

Football in Nigeria, Africa's most populous nation, has long been blighted by graft among officials that has seen players left unpaid and drained money away from developing the game.

The current leadership of the Nigeria Football Federation, headed by controversial president Amaju Pinnick, is facing a slew of corruption cases including allegations it diverted millions of dollars paid by FIFA to boost the sport in the country.

Nigeria has a wider problem with corruption - it came 146th out of 180 in the 2019 Transparency International rankings.

But as so often in Nigeria, justice can be hit or miss.

In November, a court dropped a raft of charges against Pinnick and his deputies on a technicality. All remain in their jobs and deny the accusations against them.

Since finishing his career in the mid-2000s, West has lost the braids and swapped his football shirt for church attire to become a Christian preacher in his frenetic home city of Lagos.

Known as outspoken even during his playing days, he is using his profile to keep up the pressure in the hope that this time around something finally gets done about the graft that he believes is ruining the game.

"The corruption is just killing," he said.

Other former players are also speaking out alongside him.

"A lot of things that are not acceptable around the world are now the norm in Nigeria football," said Emeka Ezeugo, who featured for the swashbuckling Nigerian team at the 1994 World Cup in the United States.

He lamented that declarations of zero-tolerance by the authorities under President Muhammadu Buhari seemed to be having little impact.

"I am hugely disappointed with the federal government because it has accepted all that's going on in our football despite its stance against corruption."

Emmanuel Babayaro was one of the heroes when Nigeria made history to become the first African team to win an Olympic gold at the 1996 Atlanta games.

But since then he's been left angered by the dwindling opportunities for young hopefuls to make careers in sport.

"Football ought to be a big employer of labour and a big business but because of the brazen corruption many aspiring footballers are so frustrated," he said.

Nigeria's footballers' union, which represents past and current players, in February filed a lawsuit aimed at getting the government to force the officials accused of corruption to stand down.

"They are public officers and that is what happens in such a situation," union president Harrison Jalla told AFP.

It is not just ex-players taking a stance.

Some former and current officials at the national federation have come forward as whistleblowers and their complaints have formed the basis for much of the legal cases.

"The players have seen the truth and they are also pained that the football they gave everything, including the best of their youth, for to grow it is dying in the country," explained Tunde Aderibigbe, a director who has petitioned anti-corruption agencies to launch probes.

"The local league, which produced many of them, is now a big joke with no sponsors and this year, teams representing Nigeria have failed internationally."

Former technical director James Peters lamented the lack of infrastructure and development progammes due to corruption.

"Both the technical department and the technical committee, which has not sat for more than a year, have not been alive to their responsibilities because monies meant for them have found their way to private pockets," he said.

"It breaks my heart that despite enormous investments... we still cannot boast of basic infrastructure to grow football in Nigeria."