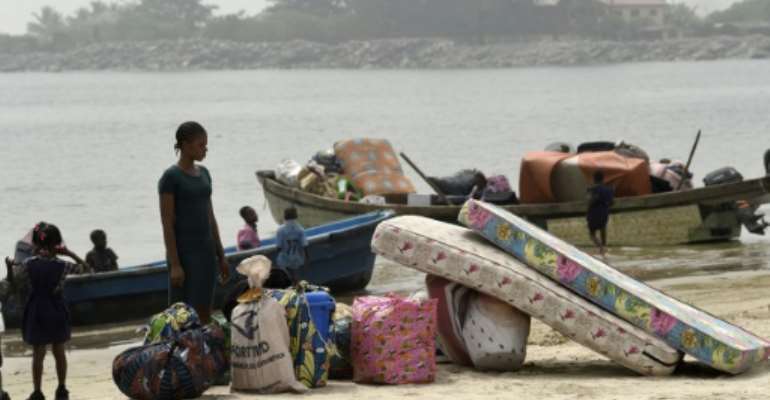 The bustling waterfront slums of Lagos are now quiet after the army evicted tens of thousands of residents. By PIUS UTOMI EKPEI (AFP)

The lagoon waters at the port entrance to Lagos, Nigeria's economic capital, are usually teeming with small fishing boats.

But the bustling waterfront slums of Lagos are now quiet after the navy evicted tens of thousands of residents from their homes in recent weeks.

The evictions are highlighting tensions over real estate in the megalopolis of 20 million where building space is an increasingly rare commodity.

The operation has also exposed the stark contrast of shantytown fishing communities in the shadow of Lagos' Ilashe beach with its villas for billionaires and expat executives.

Its army says the operation stopped residents tapping into pipelines to illegally siphon off fuel oil that is pumped from the port.

But locals and rights groups say the brutal evictions are an illegal seizure of precious building space in a city where the population is booming.

On Snake Island, a small community transformed by rural exodus into a huge shantytown, motor boats -- often the investment of a lifetime -- have been abandoned.

A few kilometres away, towards the Atlantic Ocean, the fishing community of Tarkwa Bay has become a ghost village. 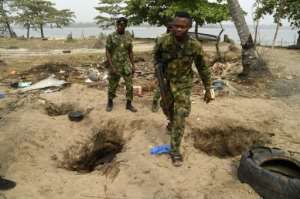 The ground is pockmarked with holes where residents have dug down to pipelines, some filled with shiny oil and water. By PIUS UTOMI EKPEI (AFP)

Brick houses, nestled under palm trees, wait empty for the bulldozers to claim them while a handful of locals sleep on the beach.

"I'm so confused. Where do I start from?" said one local father, sitting on a mattress in the middle of a pier.

Just a week earlier, the small community had welcomed hundreds of beachgoers, surfers and Sunday revellers to their piece of the Lagos coast.

On Tuesday, naval forces arrived and gave Tarkwa Bay residents a morning to pack up their lives and move out. Like a scene from a war, household goods and belongings were hurriedly abandoned.

'Explode at any time'

For Nigeria's army, tens of thousands of residents had to be "evacuated", without alternative housing, because the communities participate directly, or indirectly by buying fuel, in siphoning oil from pipelines which skirt the lagoon.

Between Ilashe and Tarkwa Bay, along the pipeline that supplies petrol throughout western Nigeria, the landscape is one of polluted desolation. 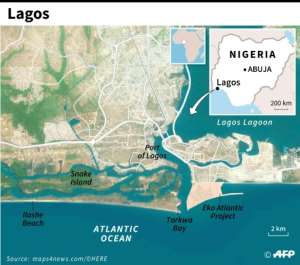 Local residents and critics see a cynical land grab in a city where building space is highly sought after. By (AFP)

The stench of gasoline catches in the throat of visitors. The few palm trees still standing are no more than trunks and the water is slicked with pollution.

The ground is pockmarked with holes where vandals have dug down to pipelines filled with shiny oil and water.

Scores of oil installations sit next to homes and Nigerian navy posts, a testimony to the impunity with which "fuel thieves" have pursued their activity for years.

"These vandals are becoming more vicious and more sophisticated by the day," Admiral Oladele Daji told reporters during a tour of the area to justify the recent evacuations.

"As you can see, this is high-organised crime. They don't farm, they don't fish. They are criminals. Nigerian economy saboteurs." 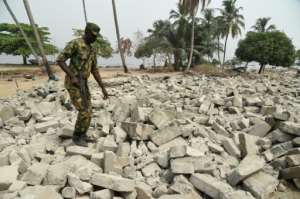 Naval forces gave the residents of Tarkwa Bay a morning to pack up their lives and move out. By PIUS UTOMI EKPEI (AFP)

He brushed off questions about why the military had not stopped the illegal activity before, and how thousands of residents could be involved in the vandalism and fuel trafficking.

"It's for their own security. The pipeline can explode at any time. And these people were here illegally," he said.

The admiral said Nigeria's government had the legal right to seize land in the interest of the nation.

Authorities are stepping into a confusing grey area where private investors, ancestral communities, the state and the army have all disputed strategic areas of Lagos for decades.

Local residents and critics see a cynical land grab in a city where building space is highly sought after.

Sprawling Lagos has grown by one million inhabitants a year for the last decade, making every square metre of real estate a precious commodity. 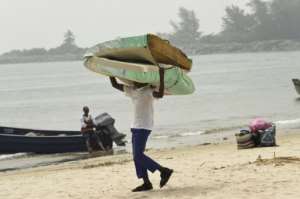 Sprawling Lagos grows by one million inhabitants a year for the last ten years, making every square meter of real estate a precious commodity. By PIUS UTOMI EKPEI (AFP)

The city's seaside and lagoon edges are even filled in to reclaim more land and create more building space to be sold to wealthy investors.

One official with the Lagos State Ministry of Urbanization, who did not want his name to be published in the media, said Tarkwa Bay should become "a place of tourism as beautiful as Eko Atlantic".

Eko Atlantic is a 10-square kilometre area of land reclaimed from the Atlantic Ocean that is planned as a gleaming, high-end residential and business city.

But the site is still virtually empty and barely three skyscrapers have emerged from the sand.

"Now everybody wants to build his own little Dubai," says Muhamed Zanna, a Tarkwa Bay resident, in front of the house he was about to abandon.

"We made recommendations to the government, we asked them to investigate crime and go after the criminals," he said.

"But now, what will happen to our children? It's a time bomb."