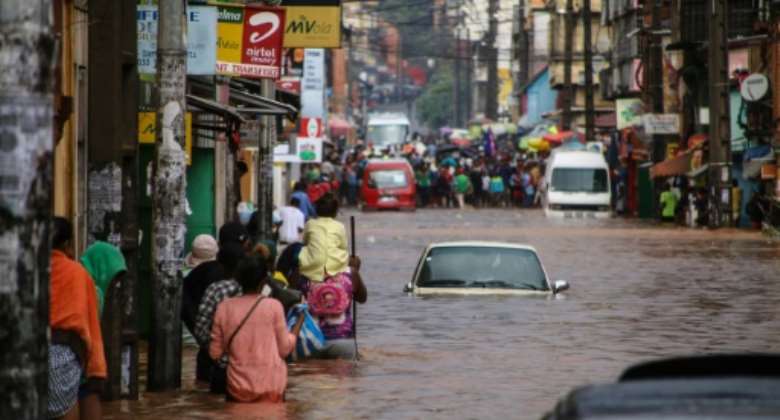 The rainy season usually stretches from October to April in Madagascar. By MAMYRAEL (AFP/File)

At least 26 people have died in Madagascar after almost a week of heavy rain in the north-west of the island, the government said on Friday.

The tropical Indian Ocean nation is in the midst of an intense six-month rainy season that often results in casualties and widespread damage.

Flooding in the districts of Mitsinjo and Maevatanana has claimed at least 26 lives since Sunday, and 15 more people are still missing and thousands have been displaced, the National Bureau of Disaster Risk Management (BNGRC) announced on Friday.

Strips of road were swept away by the rains and access to affected areas has been cut off.

The BNGRC warned that flooding in lowland and rice-growing areas also posed a risk of "food insecurity and malnutrition".

A disruption in the supply of basic goods could also lead to surge in prices, it added.

"The government is calling on national figures and international partners to help the Malagasy people with emergency aid, early recovery, rehabilitation and reconstruction," spokeswoman Lalatiana Andriatongarivo said in a statement.

The rainy season usually stretches from October to April in Madagascar, a former French colony off Africa's southeastern coast.

Global warming has increased the risk and intensity of flooding, as the atmosphere holds more water and rainfall patterns are disrupted.

Nine people were killed in January 2019 after heavy rains caused a building to collapse in the capital Antananarivo.

During this period, the country is also often hit by cyclones and other tropical storms.

Call e-levy a VAT increase and stop distorting our well esta...
36 minutes ago