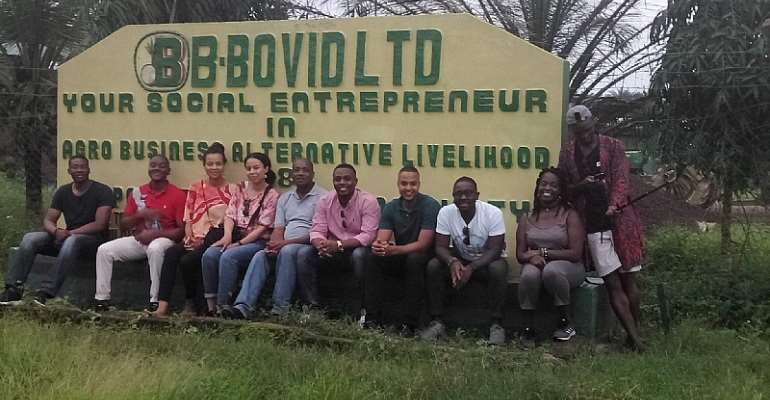 Four major international sponsors of agribusiness are at various stages of supporting B-BOVID’s network of farmers to modernize their business operations.

This is a strategic boost to the all-inclusive, climate-smart, social business model B-BOVID has introduced into the country over the past ten years.

Subsequently, other international donors have taken advantage of B-BOVID’S unique business model and improving prospects to inject various sums of donor funds into the company.

Agroforestry Technical Assistance Facility (ATAF) is helping to structure and manage B-BOVID’s out-grower network to reach full traceability from farm to the mill.

B-BOVID has also signed an MOU with Solidaridad Network West Africa to build a comprehensive farmers’ database, farmers’ profile, digital mapping and to manage Rural Service Centers (RSC’s) in each of its six operational centers as a means of providing support services to oil palm smallholder farmers.

AVRIL Foundation, on its part, is supporting B-BOVID to study and identify market opportunities for farm diversification, while AgDevCo-SDU (Smallholder Development Unit) is helping B-BOVID and its farmers to get RSPO certification.

This will assure customers that the standard of palm oil production is sustainable. The company already receives technical support from GIZ/CIM in its multi-faceted agribusiness operations.

In a statement, the Chief Executive Officer of B-BOVID, Issa Ouedraogo, said although Africa still has huge fertile lands, abundance of water and a dynamic youth population, about 63% of the farming population is illiterate, a major deficit to modern agricultural practice.

Reacting to the latest development within the organization, Mr. Ouedraogo said Agriculture in Africa is a trillion dollar business, and is indeed, the future of Africa. However, he said Africa remains trapped in out-dated approach to value creation which has immensely limited the continent’s potential.

“We must prepare to tap into this global opportunity in order to come out of this vicious circle of poverty. There is an urgent need to expand access to secondary and tertiary education, build capacity and promote entrepreneurship among the youth, and reduce migration to towns and other countries for greener pastures. We need to engage development partners, donors, corporate bodies, chiefs, foundations, universities, entrepreneurs, to work together hand in hand to build a solid foundation for a truly sustainable economic development and growth,” he said.

Mr. Ouedraogo called for a comprehensive national agenda that goes beyond party lines and which takes care of emerging climate and environmental issues, food security, with a mechanism that monitors and eliminates greedy, corrupt and incompetent officials from all levels of the food chain.

He said the Ghana Beyond Aid agenda will be possible with a well-planned, carefully nurtured and developed Agricultural sector that has the capacity for youth empowerment and job creation.

ABOUT B-BOVID
B-BOVID- Building Business on Values, Integrity and Dignity, is a private agro-business in the agricultural value chain operating in the palm oil and vegetables

AWARDS AND RECOGNITIONS
The company’s CEO has won several awards, while his model has caught the attention of relevant global organizations like the World Bank and the UN, after he won the UN’s Social Investment Pioneer Award along with nine other businesses from around the world in 2012.

In 2013 and 2017, he was for named as the Best Farmer in the Western Region, while in 2016, he was crowned as the Chamber Businessman of the year 2016, at maiden Chamber Business Awards by the Chamber of Commerce and Industry Awards and decorated by President Akufo-Addo.