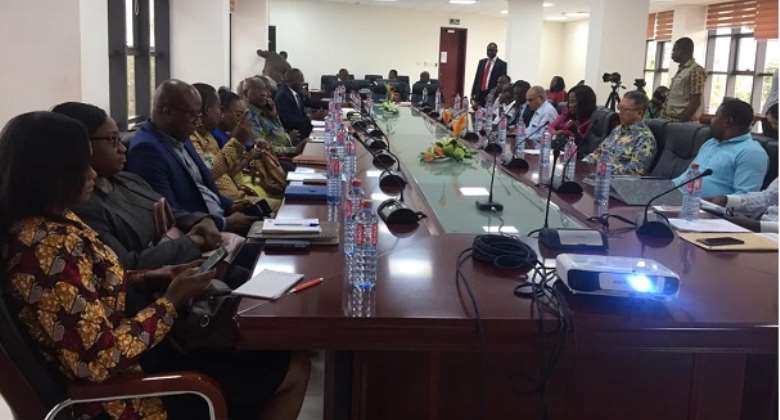 Officials of Aluworks at the GITC

Aluworks Company Limited has petitioned the government Ghana through the Ghana International Trade Commission (GITC) over what it termed as unfair trade practices by its Chinese competitors.

The company cited dumping, price undercutting, trade in cheap products, among others, in its petition.

Ghanaian markets, importation of aluminium coils and circles at prices that result in dumping and abuse of the 5% concessionary duty rate, among others.

The Managing Director of Aluworks, Kwesi Okoh, at the hearing of the petition on Thursday, January 9, 2020 in Accra, appealed to government to impose the World Trade Organization (WTO) laws to enable the company to compete favourably on the market.

Mr. Okoh said the non-implementation of the laws has made it possible for Chinese companies operating in Ghana to charge lower prices for goods they trade in.

He mentioned unfair trade practices by foreign companies, especially the Chinese, which enjoy subsidies and export rebates in their home countries and flood the Ghanaian market with cheap products.

He said it was time Ghana applied WTO rules and imposed equivalent additional duties to match the level of any export rebate granted these foreign companies.

According to him, his company has been making losses since 2009 mainly due to the unbridled import of sub-standard and cheap aluminium sheets and others.

“We have to apply the World Trade Organisation rules, and we have to impose equivalent additional duties to match the level of any export rebate granted. We have waited for this for 10 years; we want it…by the end of 2019 and no later. Aluworks is on the verge of extinction,” he lamented.

He explained that the work of the erstwhile Tariff Advisory Board practically proved the allegation of dumping, but it has to be re-confirmed.

However, getting statistics from China has been difficult.

Mr. Okoh said the GITC should use diplomatic contacts to derive required figures, re-prices in China, and official levels of all export rebates on aluminium.

The commission is expected to conduct impartial and fair investigations into the merits of the petitions and make recommendations in addressing the issues raised within a period of at least nine months.