UNHCR Needs Our Help To Prevent A World Ebola Pandemic 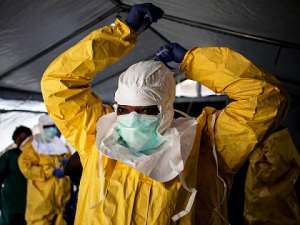 As of 17 December 2019, a total of 3351 Ebola Virus Disease cases were reported in the Congo, including 3233 confirmed and 118 probable cases, of which 2217 cases died. And Ebola will stay in Congo, therefore a world pandemic becomes more and more relevant.

Armed conflicts in different parts of the Democratic Republic of Congo (DRC) leaves a trail of destruction and victims. Thousands of people flee for fear of mutilation, rape, and murder. Moreover, the country is struggling with the most worse Ebola outbreak.

More than 4.5 million people are fleeing horrific violence within the DRC.

Help UNHCR receive people safely
Violent conflict in the DRC forces millions of people to flee and the UNHCR takes care of people on the run and protects them.

“We cannot do this alone, said UNHCR. The situation in the DRC is one of the most complex humanitarian situations in the world. There was hope in the country after the civil war ended in 2003. But since then, in different regions in the DRC, horrific fighting has flared up, and thousands of people are struggling again to survive,” said UNHCR.

Violence and human rights violations in large parts of the DRC

Human rights are being violated on a large scale in the DRC. People are mutilated, raped or killed. Or they are arrested and detained for no reason under inhumane circumstances. At present, people mainly flee from the Kasai, Tanganyika, and Kivu regions. There are now more than 5 million Congolese on the run.

Congolese on the run in their own country
A relatively small group of Congolese (735,000) fled to one of the neighboring countries. There are also more than 826,000 Congolese who seek shelter in neighboring African countries. Most Congolese people seek security within the national borders. There are approximately 4.5 million displaced persons in the DRC. They have seen and experienced horrible things.

Missing Congolese children
Now that the crisis is getting worse, more and more children are missing. The exact number is unknown, but it is estimated that there are thousands of missing. One of the missing children is the daughter of Augustine.

She is one of the upset parents, fled from the violence in Tanganyika and taken care of in a camp for displaced persons in the capital Kalemie. Augustine's 6-year-old daughter has been missing for a year.

"The rebels penetrate our villages, they grab our children and disappear," she says, "They rape the girls and cut them into pieces with machetes." She looks ahead with an empty look. "There is no hope," Augustine says, "I will never see my daughter again."

Reception of refugees from neighboring countries of the DRC

While the ongoing conflicts force many Congolese to leave their homes in a hurry, the country also receives more than half a million refugees from neighboring countries. Every day new refugees come from Burundi, the Central African Republic and South Sudan.

The country has been struggling since mid-2018 with a prolonged Ebola outbreak. The disease has since spread to Uganda and to the border with Rwanda, and the situation has been declared an international public health emergency. The Ebola outbreak exacerbates the already tense situation in the worst affected areas, such as Ituri and North Kivu. The situation is very unsafe and many people flee.

Emergency aid must be scaled up quickly
In large parts of the DRC, the situation is classified as emergency level 3. This is the highest level and means that emergency aid must be scaled up very quickly. It is precisely for the most vulnerable people that protection is desperately needed, but it is becoming more difficult every day to ensure that humanitarian aid reaches these people.

What emergency assistance does the UNHCR offer in the Democratic Republic of Congo?

Help in the regions that people return to
In regions where people return home carefully after they have had to flee, UNHCR helps people to start their lives again. They offer financial support to the most vulnerable people. This allows them to rebuild their homes themselves and to purchase household items and (agricultural) tools.

UNHCR also protect Congolese people who are crossing national borders to neighboring countries, in collaboration with local authorities. They do this, for example, in Angola, a neighboring country that receives more than 35,500 refugees from the DRC.

Support in the field of Ebola prevention
UNHCR supports the governments of the DRC and neighboring countries in preventing Ebola. They focus primarily on preventing the spread of the disease in host communities and settlements where many refugees and displaced persons reside.

Current figures on emergency aid from UNHCR
UNHCR urgently needs more financial resources to be able to provide the emergency assistance that is so urgently needed. Help to receive and protect victims of horrific violence.

More than 4.5 million people are fleeing horrific violence within the Democratic Republic of Congo. Help us receive people safely.

TIME IS RUNNING OUT. SPREAD OF EBOLA TO OTHER COUNTRIES IS JUST A MATTER OF TIME, SO PLEASE DONATE...

Joseph Yamin to clear weeds in all abandoned Mahama projects...
35 minutes ago