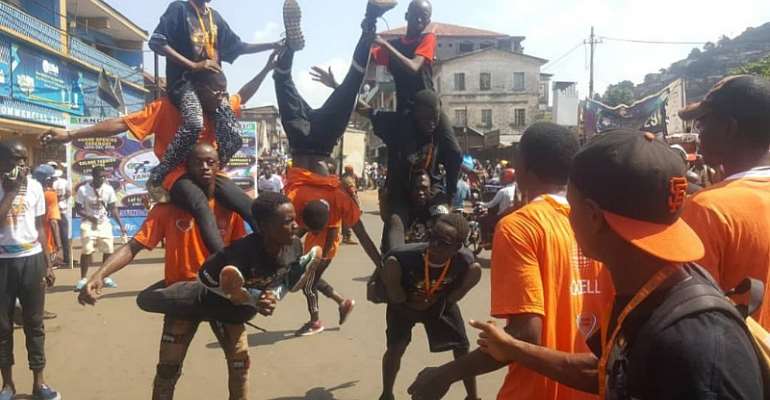 Sierra Leone's capital Freetown has an old tradition of Christmas street carnivals organised in various neighbourhoods across the city. Residents gather on the streets enjoying food and music for a month-long celebration.

Christmas is celebrated by 29°C in Freetown. The city is bustling with Christmas activities and, in some neighbourhoods, the streets are crowded, if not blocked, for the yearly street carnivals, an event which takes place in various spots around the capital throughout December.

“People just enjoy the food and music outside. Every street wants to have a carnival. People will set up a stage, put chairs outside. They come well dressed to dance, eat Sierra Leonean food, like pepper soup, cassava leaves,” says artist Tutie Haffner, who has organised a few street carnivals in the past.

He is an actor and musician, and director of the Freetong Players International music band. Haffner is also one of the organisers of the Tangains Festival at the Siaka Stevens stadium in Freetown.

The street carnivals in Freetown have been running for the past 30 years with increased popularity in the last 15 years. Most of them are free, with some contribution requested to cover costs.

“I cannot imagine waking up one day in Freetown with no street carnivals in December. I don't think it will happen,” exclaims Haffner.

For musicians, the carnivals represent an opportunity to promote their songs.

“It's the time when our people feel us, one on one,” says the musician.

According to Haffner, the carnival crowd quite enjoy music from Sierra Leone and Nigeria. And they are quite partial to gumbe music as well as traditional genres belonging to various ethnic groups – for example, the mende music of the Mende people, the bubu of the Temne people or the milo jazz emanating from the Krio culture.

A younger generation of Sierra Leonean musicians enjoy experimenting with bembeske, a fusion of the traditional genres.