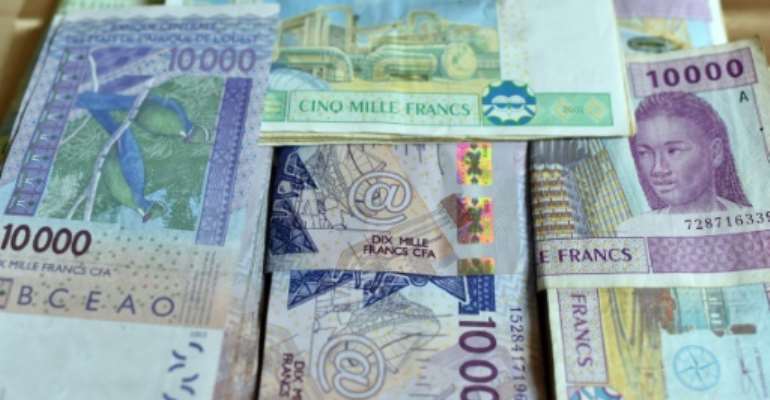 Eight countries in West Africa use the CFA franc. Six other countries use a Central African version of the French-backed currency.. By ISSOUF SANOGO (AFP)

Plans to overhaul the CFA franc, a France-backed currency used by former colonies in West Africa, have drawn reactions raising from scepticism to cautious optimism.

Some experts in the region questioned whether the change amounts to much but others thought it a step forward, although vital issues remain to be tackled.

Introduced in 1945 during colonial times, the CFA is linked to the euro under an arrangement that requires African members to lodge half their reserves in the Bank of France.

The deal provides currency stability -- and a dampener on inflation -- for the eight countries in the West African Monetary Union (WAMU).

But the dependence on France, and even the name of the currency itself, are under fire.

Critics have directed withering fire, describing the CFA franc as a symbol of colonialism and past French meddling and an affront to economic sovereignty.

Under it, the CFA franc will be renamed the "eco" and its member countries will no longer be required to keep reserves in France.

The currency will retain parity with the euro, and France will quit its managerial institutions.

However, France will provide backup, in the form of a line of credit, if WAMU countries hit a currency crisis.

The description of the change as "historic" ran into immediate flak.

"It's six of one and half a dozen of the other," the Ivorian opposition newspaper Notre Voie ("Our Way") said, while the Quotidien de Dakar daily in the Senegalese capital said: "The outside has changed, but inside, nothing has moved."

Senegalese expert Makhtar Diouf said the announcement was a "non-event" while Ivorian economist Mamadou Koulibaly, an opposition candidate in next year's elections, said, "there are reasons for feeling confused."

Donaldine Amangbedji, a researcher at the Abomey Calavi University in Benin, saw no tangible benefit for the public except for "stirring debate on possible alternatives".

But Togolese economist Kako Nubukpo, a key figure in the attacks on the CFA franc, said the announcement was "marvelous news... (a) historic moment."

He cautioned, however: "We will however remain vigilant about the currency regime, which should be sorted out soon -- the fixed parity (with the euro) is transitional."

Senegalese economist Felwine Sarr, writing on Facebook, said the change was "a step forward, but not a revolution nor a fundamental break."

"At the present time, this reform... only concerns the most symbolic aspects, but leaves major components of the former relationship unchanged," Sarr said.

Several important questions will have to be answered in the coming months.

Perhaps the most pressing is when the new currency will be launched in real terms -- a task with many political and technical challenges.

Macron on Saturday said: "The eco will see the light of day in 2020, and I welcome it."

Also unknown is whether other members of the regional bloc ECOWAS -- which has also planned to launch a single currency -- will team up with the eco.

Eight WAMU countries are members of ECOWAS, although the bloc's economy is dominated by Nigeria, the regional powerhouse.

Participating countries in ECOWAS will need to narrow their differences, on debt and inflation and other macro-economic essentials, to make the eco a success.

Handshake: Macron and Ouattara at their press conference in Abidjan last Saturday. By Ludovic MARIN (AFP)

"Many ECOWAS countries are not ready," warned Amangbedji.

"If a currency is created in these conditions, it will be completely devalued. Some say that the risk is worthwhile, others say it will lead to wild ride."

A third question is the response of six other African countries that also use a central African version of the CFA franc.

On the streets of the capital Dakar, many Senegalese said they were cautious.

He pointed to France's 50-percent devaluation of the CFA franc in January 1994, a sudden move that sought to spur agricultural exports in WAMU countries but at the cost of hiking the price of imported goods.