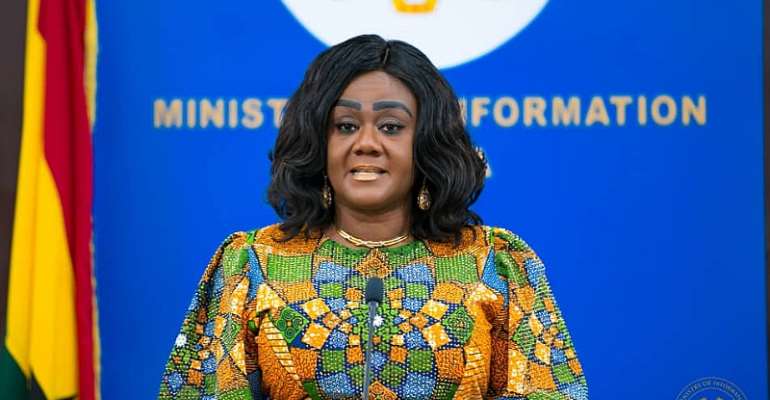 Minister for Tourism, Arts and Culture, Barbara Oteng-Gyasi has revealed that the 2019 Year Of Return has impacted greatly on the country’s tourism sector through revenue generation.

According to her, the 2019 Year of Return (YOR) which marks 400 years of slavery has seen over eighty (80) events comprising stakeholder meetings, investment forums, musical concerts, Arts exhibitions, carnivals, and cultural festivals, among others.

Addressing the media at the Meet-The-Press in Accra, she said “Major events implemented as part of the YOR are PANAFEST, Emancipation, Back to Africa, Ghana Diaspora Celebration and Homecoming Summit, as well as NAACP Jamestown to Jamestown.”

The sector minister added that the various activities attracted celebrities and dignitaries among others from around the world.

She mentioned that some dignitaries the Year Of Return brought in the country include; the Prime Minister of Barbados, Mia Mottley, Speaker of the US House of Representatives, Nancy Pelosi, American Actor and Film Producer, Samuel L., Jackson and British Basketball Executive, Pops Mensah-Bonsu.

The Minister noted that the tourism sector recorded a tremendous growth of 18% in International Arrivals from the Americas, Britain, Carribbeans and other key countries whilst total Airport Arrivals increased by 45% over the previous years.

Hon. Oteng-Gyasi disclosed that numerous activities witnessed in the course of the year resulted in an increase in tourism sector spending with most major hotels being at a 100% occupancy during the climax of YOR activities in December.

She intimated that aside the estimated spending per tourist seeing a significant increase from $1,862 in 2017 to the current figure of $2,589 per tourist, the impact of tourism on the economy is estimated to be about $1.9billion whilst average stay in the country saw an increase from 8 days to 10 days.

The tourism minister revealed that on the processing of visa on arrival, there have been major reforms adding that collaboration with the Ministry of Foreign Affairs and Regional Integration and the Ministry of Interior, Visa on Arrival fees was reduced from $150 to $75, enabling a significant number of people to visit the country.

She highlighted that the Year of Return initiative has revolutionised Ghana’s tourism sector, projecting the country significantly.

“The Cable News Network (CNN) travel news report for 2019 placed Ghana as the 4th best destination to visit out of 19 countries. The country recorded a remarkable increase of 237,088 airport travels as of the third quarter of 2019, representing a 45% increase over the previous year. These successes chalked calls for putting sustainability measures in place to build on the sector’s achievements to continue to attract tourists and investments into Ghana,” she added.

She stated that following the successful implementation of the YOR, Ghana 2019, the Ministry has recognized the need to continuously carry out activities to sustain the country’s Diaspora relationship and build on the positive impacts of the YOR initiative.

She mentioned that the Ministry has therefore intended to implement a campaign-oriented project, “Beyond the Year of Return – a Birthright” over a ten (10) year period under the theme, “A decade of African Restoration 2020-2030”.

Speaking on the Marine Drive Investment Project, the Minister revealed that President Akufo Addo has cut the sod for the commencement of work as one of Government’s flagship State of the Art projects.

She explained that decongesting the entire City Centre and re-instating a new land-use structure befitting the Capital City; the Project Consultants, Adjaye Associates (AA) has finalized the Master Plan design as it worked closely with ABP Consult Limited, the Consortium and Ghana Tourism Development Company (GTDC).

“Architectural Design Service which involves designs for the underground parks, Boardwalks, urban parks, space for canopies, public Arts, children’s play-ground, lighting, utilities integration is 100% complete. Site Design which include storm Water Management together with a model for the designs for alternative modes of transport, etc. is also 100% complete,” she said.

Hon Oteng-Gyasi disclosed that thirty-Six (36) out of a total of Fifty-Three (53) Ministries, Departments and Agencies, and Business Owners operating within the Marine Drive Tourism Investment Project Enclave have been relocated to Ghana House whilst clearance of the site is 70% complete.

She further explained that Institutions with special challenges such as MUSIGA, the Army Barracks, Navy Transit Quarters and Births & Deaths Registry etc., are being engaged to address the issues.