Overhaul The 1992 Constitution Of The Republic Of Ghana 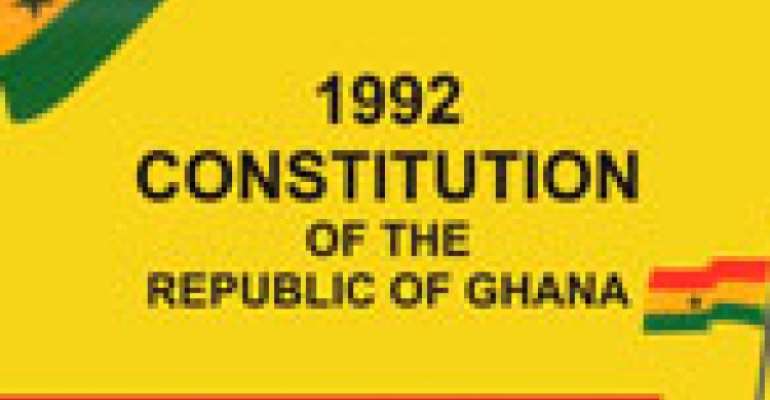 A Revolutionary Soldier's response to those who call for Ghana's Constitution to be amended. He's one of the under 40s. His speech is instructive to not only Ghanaians but all African nations.

Read on and be part of the revolution.
"Amendment," you say?
Comrades, that's an understatement to say the least, if one calls for Ghana's 1992 Constitution to be amended.

Without equivocation, unapologetically, our constitution needs a complete overhaul.

The very letter that undergirds the constitution, raising an age threshold as for those would-be Presidents, should be 40, is not comprehensible.

The architect of the wording of the 1992 constitution, President Rawlings, one under whose captainship the constitution was written had come to power when he was under 40. Paradoxical, isn't it?

By the age barrier, as entrenched as it's, if the Christ of the Christian Bible, the one in whom most Ghanaians claim their Faith, and died at 33 was to live in our days, He wouldn't had qualified to lead one country with a small population of Ghana's, because He is under 40.

The Greek hero, Alexander the Great, with all the name made in wars and his conquering of kingdoms, and died in his early 30s wouldn't had qualified to lead Ghana, because he wasn't up to 40.

France today is led by Emmanuel Macron who came to power age 39, Ghana needed not him then if he was born here.

There's no need calling out the register of great leaders whose legacy are enshrined in gold owing to their great exploits, though under age 40.

Such is the interpretation of the constitution to the common man in the streets of Ghana and almost all African nations.

The constitution is not looking at the capabilities of the citizenry, but pigeonhole the citizenry to a system that makes us automatons, one that kills creativity and positive attitudes.

The patriotic soldiers who are bent on rebuilding the fallen walls of our country and continent should with all our might sound it louder that: "the 1992 Constitution of the Republic of Ghana does not only need to be amended, but needs a complete overhaul to suit a 21st century progressive binding document".

A modern constitution that gives power to the people on merit, and be beneficial to the entirety of the Ghanian and African socioeconomically.

Let me rhetorically question here. The biggest economy in the world, the country on whose coughing Africa catches a cold, the United States Of America, at what age does one qualify to stand for presidency there?

To wit: "it's the warrior that's placed at the warfront".

Such great warriors must not be over 40 before they're given the armoury to showcase their mettle and prowess.

For far too long, the over 40s have been made captains of our dear nation, but we've kept on losing winnable battles.

Today, there's nothing good to write home about the morality of our school-going ages. Moral standards are sinking down into a cesspit as the over 40s still lead our country. Exploitation of the vulnerable is skyrocketing. The siphoning of our bequeathed resources to dress the dinner tables of the neocolonialists is at its peak under the guidance of the over 40s.

Economically, for the past 25 years, our currency, the Cedi, is depreciating, losing its value at alarming rate, and the only stemming measures the over 40s leading our country today can present to us is to pump in foreign currency that would only be short term measures, and at the end do have a ripple effect on the economy.

The 21st century, Comrades, yearns for leaders who understand the system, not those who want to lead because they've grown grey hairs and are supported on walking sticks.

Now is the time we take our destiny into our own hands and stop the sinking of the ship captained by the sleepy over 40s.

So, I reiterate that: " the 1992 constitution of the Republic of Ghana needs a complete overhaul, not amendment".

The clay foundation on which the blocks are built is making the structure caving-in. Let's join hands to save our today and tomorrow.