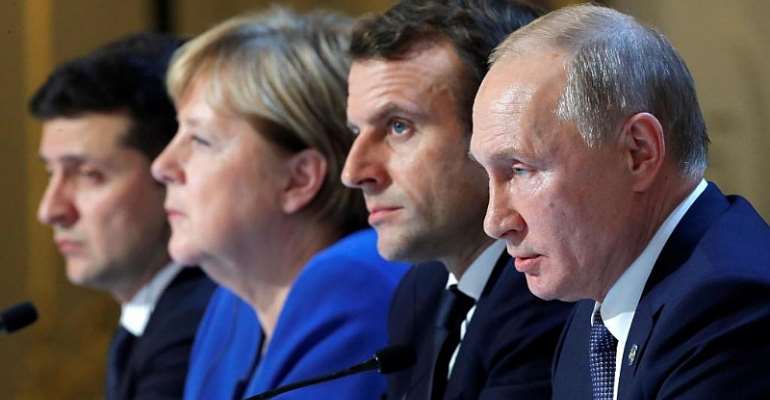 French President Emmanuel Macron hosted his Russian and Ukrainian counterparts Vladimir Putin and Volodymyr Zelensky in Paris on Monday for talks on the conflict in eastern Ukraine that yielded some progress but no major breakthroughs.

Macron hailed progress after some eight hours of talks at the Elysée Palace on ending the five-year conflict between pro-Russian separatists and Ukrainian forces.

“The fact we are here together side-by-side is something important,” Macron said, describing the conflict as an “open wound at the heart of the European continent”.

German Chancellor Angela Merkel was also present for the first-ever bilateral meeting between Putin and Zelensky, rekindling a four-country format that brokered a peace deal in Minsk in 2015 that failed to secure a lasting ceasefire.

The four parties issued a statement saying the Russian and Ukrainian leaders had now agreed to implement a full ceasefire and proceed with a new withdrawal of forces from conflict zones by March 2020.

Putin hailed the outcome as an “important step” towards de-escalation, but Zelensky admitted he had come away wanting more.

“It is a very good result for a first meeting, but I will be honest, it is very little, I wanted to resolve a larger number of problems,” the Ukrainian leader said after the talks in Paris.

The main shortcomings of the meeting appeared to be the failure to agree to a timetable for holding local elections in the Donetsk and Lugansk regions, as well as a lack of agreement over control of Ukraine's eastern border with Russia.

Macron said a new summit would be held in four months to take stock of progress in implementing what was agreed.