I Stand With The 'kayaye' Hawker 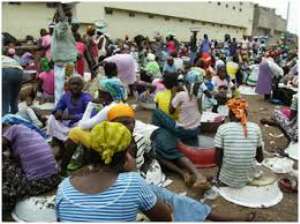 I am incensed by the Anas latest video that captures the gross violations of the rights of street hawkers by city guards.

I was shocked that one city guard in the video used a stick to poke the breast of one woman whose items he had ceased. The woman seemed to be pleading to be given back her wares.

And I couldn't believe. it.

You see, this country belong to each of us; no one has more right to economic rights than the other.

We have a government which is on record to have said it would construct a hostel to house the 'kayayes ' on the streets of our cities. It only means that government itself is aware of the plight of these young women on our streets.

And the major reason these women are forced to make a living on the street is because central government past and present has failed to help utilize the vast resources and opportunities that exist where these women come from.

We cannot continue to watch government use our taxes to pay people to violate the rights of the people even as 'kayayes'.

By this time, i thought this video would move the ministry responsible for gender to call some stakeholders meetings to deal with this state sponsored violations of the common people.

But it makes sense if Government would just stay quiet for this matter to pass as all other matters.

And this would just pass largely because we have a class feminist group in this country. These are a class society feminist.

They are not interested anymore with the issues that affect the generality of women. They are probably shy having any interest in a feminine issue related to 'kayayes'.

For them, the open violation of the rights of 'kayayes ' isn't worth their attention. .

Thier important agenda for society now is to seek the luxurious rights of a class of women. They are with vim talking about the modern woman's right to orgasm. They are talking about a right not to cook the food they would also eat in the kitchen.

Normally, when you liberate a group from society, the least you expect is the liberated group would offer to pull others behind them up.

But the African tragedy is when a group is liberated here , they form a new class. They are shy of their old selves.

So, this video would be shown; a few would be shocked ; and the serious human right violation would be swept under the carpet largely because privileged class feminist who have voice on media are focused now on claiming orgasm.