My Encounter With A Reckless Okada Rider! 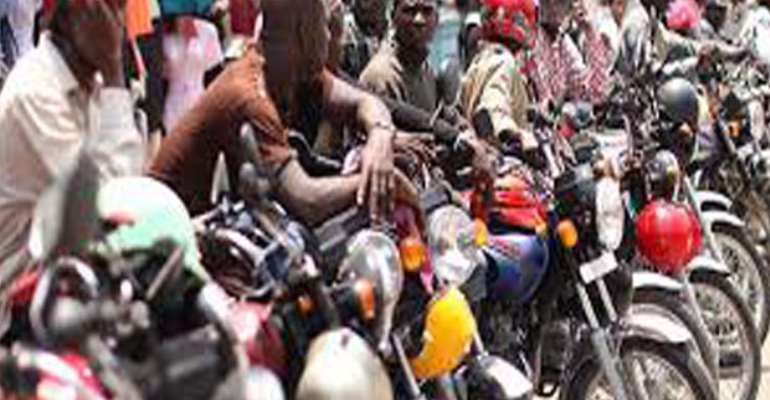 Okada is a Nigerian term that describes the use of motorcycles for commercial purposes. Okada has virtually become an informal feature of the public transportation system in the capital city, blatantly defying the legislation that outlaws its usage as a commercial venture. But it has also become a source of concern for many, as its operations continue to grow with its attendant problems.

Many have written on the need for the city authorities to legalise its use, while many others have discussed its ills on different platforms with the view of generating a national debate on the issue but to no avail. Like the proverbial ostrich, we’ve all buried our heads in the sand, pretending the okada menace does not exist.

We are all guilty, yours truly inclusive. About three weeks ago, the Ghana Journalists Association (GJA), in collaboration with the Ministry of Roads and Transport, discussed the subject at the International Press Centre. The programme went unnoticed because little publicity was given to it. And how could I blame others for not highlighting the event when I was also guilty of not even reading Daily Guide‘s editorial on the matter titled “Okada: Menace, Saviour”? I only looked for the editorial after my ill-fated encounter with a reckless Okada rider.

I had an appointment with a senior police officer at the Police Headquarters last Tuesday. It was only about 10minutes to 2:00 pm, the scheduled time, when I reached circle. My initial intention was to board a taxi or Uber, but the traffic was so heavy that I decided to opt for an okada.

Indeed, that was my first time of using an okada, and it may be the last. With the benefit of hindsight, I can say the decision to use an okada was very stupid on my part. Yes, I was late and desperate; but was it not foolhardy on my part to use an okada when I’m not oblivious of their notoriety for causing accidents.

When I sat behind the rider, he gave me a helmet which could easily pass for a calabash. I told him though I was late for an appointment, I would still want him to be careful and avoid reckless riding. He did obliged by nodding, but his subsequent actions proved that my appeal had fallen on deaf ears.

Then began my six minute roller coaster ride with death. My heart was virtually in my mouth during the whole ride. The okada rider nearly hit the back of a brand new Benz car around Bus Stop restaurant, owned by Harry Zakour. He also narrowly missed knocking down a pedestrian around the Nima Police station area.

My protests continued to fall on deaf ears as we journeyed on. We were not third time lucky as he hit the back of a car around the Nii Tackie Tawiah overpass. I really did not see how it happened. All I heard was a bang and then saw the two of us on the ground.

He quickly rose up with the motorcycle and I instinctively joined him as he sped off. I looked back and saw the driver cursing and hurling insults at us. You can therefore imagine my relief when I reached my destination.

Yes, okada ensured that I did not miss my appointment, but at what cost? I’ve had a pain in my hip since that episode and heaven knows it could have been worse. What if it had been a dislocated spinal cord or even death!

I’ve learnt my lesson, albeit a very bitter one. Now I know the convenience the okada ride would afford me cannot be equated to the risk. For the risk is far greater than the little convenience.

So am I asking for the ban on okada to be enforced? That is a difficult one to answer considering the political and social consequences. I doubt if the government is ready for the high numbers the enforcement may add to the already high unemployed youth. Not forgetting the negative political consequences such an action may attract for the government.

It is thus very obvious that Okada has come to stay. The law as it is now is unenforceable for political and social reasons. I therefore add my voice to the voices pushing for enforceable regulations to be adopted for okada operations.

Until such recommendations and others are fully implemented, yours truly will never even dream of patronizing okada again. And I strongly advice you do same, Abusuapanin.