The President Must Hear This, Ghana Needs A National Development Policy 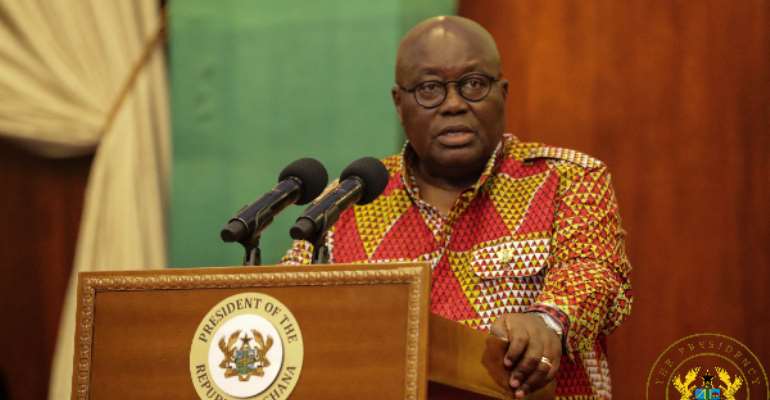 Down memory lane, we could still remember how passionate as kids we use to sing these lines of the Ghanaian patriotic song which instilled in us the love of this country and the patriotism in nation-building and so I grew up with high spirits to give my all for mother Ghana more especially each time I remembered the part that said " we are all involved [3×], in building our motherland." Great words in that composition. But I ask this question, "are we living by these words to build this country?

A national policy according to the dictionary of military and associated terms is "a broad course of action or statements of guidance adopted by the government at the national level in pursuit of national objectives". Originally propounded in 1876 by John A. Macdonald's of Canadian Conservative Party for economic development and later put into action in 1979.

It is worrying to know that the leaders of this country know the very essence of what it takes to lift this country to greater heights yet are failing to do so due to varying reasons some of which are personal selfish interest, political interest and other influences all constituting malignant cancer which has no remedy. The country is seriously suffering the effects of these actions of omissions and commission by ruling parties. Manifestoes are read every four years and yet its implementation has been the issue and the ordinary Ghanaian who wasted their time in cues to vote is taken for granted.

Citizens are left with disappointment because instead of they being relieved of their plights, situations rather worsen. Who ensures that manifestoes are implemented?. So at the end the country is tossed up and down with different ideologies without any progress. A national policy will define what has to be achieved within the period of incumbency and will provide the guide to the future.

Democracy has been well embraced by Ghanaians but if the institutions to guide this democracy is weak then the future of this country is bleak. Why are we suffering when this country lacks nothing in terms of resources. Our leaders travel outside this country and go to perform excellently, but perform abysmally on their own soil. How can we move forward when each government refuse to continue projects started by the exited government and these projects from tax payers money are left under the mercy of the weather to waste away.

Other completed projects which also needs to be commissioned are also equally abandoned. Look at what happened to affordable housing project started by President Kuffour, dual carriage (double road) from Accra to Tamale,;Komander Sugar Factory, Kumasi Kejetia Market, also by President John Mahama. Roads under construction are discontinued and left to deteriorate, not quite far are roads of Abirem to Nkawkaw, Akim Ofoase to Akim Oda, Akim Oda to Koforidua etc. Budgets has been read on occasions but we are still where we are. That is why I am convinced that a national policy if implemented will do the country more good than the state we find ourselves now.

The sense of direction is lacking and so every elected government finds themselves in the middle of the ocean, the dilemma between going by his party's manifesto or facing the challenges confronted whiles in government.

A national development policy which may be subject to review in every ten to twenty years would provide a focus and a direction for the country and is the ideal choice. Clear lines of participation by all political parties, policy makers, legislatures and various key stake holders to constitute the board for the drafting of this policy. This will ensure that all sectors, be it health, roads, agriculture, etc are factored in the planning to achieve a holistic policy. The electoral processes will not be interrupted, elected government would be obliged to continue from where the other government left off. This will ensure growth and development of the country. Developmental projects will not be abandoned and the citizens will reap the benefits.

I am saddened and so are the other citizens to see tax payers money go waste for uncompleted projects due to political differences. TV3 , a Ghanaian television station, has taken it up to comb the country for various projects like the affordable housing, school buildings, factories markets etc which are at various stages of completion and are abandoned to waste away and rot.

Some completed and other partially completed hospitals leaking away to destruction, when patients are sleeping on the floor with others refused admission due to no bed syndrome, all because it was started by a different political party which is no more in power. Another government also takes over and repeats the same thing. Is the country safe in the hands of these politicians?.

Elsewhere institutions work and our memories is still fresh with the speech delivered by President of the United States, President Barrack Obama during his august visit to Ghana on the 11th of July, 2009; which noted that we have everything within our reach to move this country, the exception is to build strong institutions for the efficient running of these resources. Our politicians can testify how these institutions work in foreign countries because they have been there severally.

Well-meaning Ghanaians also look forward to a better Ghana that is why they fall prey to the flattery words of politicians during campaign thinking they would come and perform better, but the little said about that, the better. The benefits associated with their positions insulate them from the hardships experienced by the ordinary Ghanaian so when people complain they deny all is well.

In conclusion, it is undoubtedly true based on all these premises that it is very essential to have a national development policy.

I would like to end with this tune from one of the popular Ghanaian gospel musician Uncle Ato, sang in the Twi language "Oman ye wo man, oman ye me man. Yeni baabia ko Name kye adze a, yen de ara nen. Wonsom wonsom oni nipa.........." A reflection of a true and patriotic citizen without greed will liberate this country. It is a collective effort of all but leadership and governance play a major role. God save Ghana.