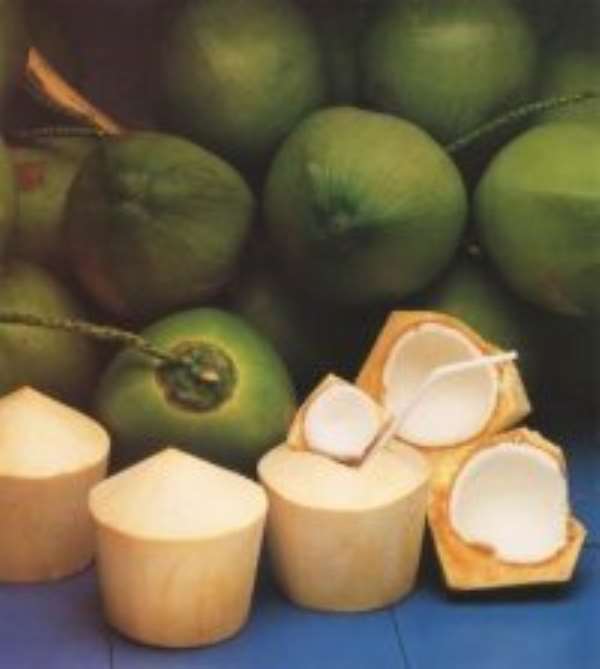 Coconut water is a popular beverage now in Ghana with huge economic potential. It is dubbed “Mother Nature’s sports drink,” according to a WebMed article authored by Kathleen M. Zelman, MPH, RD, LD . Its Low in calories, naturally free of fat and cholesterol , more potassium than four bananas, and super hydrating -- these are just a few of the many benefits ascribed to Ghana’s latest health craze: coconut water. No doubt there is a proposal for coconut sellers to wear special uniforms and also contribute to SSNIT. Ghana's coconut industry, according to organisers of the 2019 International Coconut Festival held in Accra, has a potential of earning the country 2.8 billion dollars worth of revenue annually. In 2017, Ghana was ranked 14th on the list of the world's top coconut producers, with 383,960 metric tonnes produced that year alone according to data from the Food and Agriculture Organization (FAO) Corporate Statistical Database.

Dubbed "Mother Nature’s sports drink" by marketers, the demand is skyrocketing every corner in Ghana. There’s no doubt that a tall glass of pure, organic coconut water is one of the most refreshing beverages you can enjoy, whether it’s after a workout or simply to quench your thirst during a hot summer day.

In this article, you can learn more about coconut water, including its composition, where it comes from, its uses and benefits, and why it has become one of the most sought-after health beverages today.

What Is Coconut Water?

The scientific name for coconut water is “coconut liquid endosperm” according to the Molecules 2009, 14, 5144-5164 — that is the clear liquid in the center of young, green coconuts and is made when the endosperm tissues of a coconut fruit go through nuclear mode of development, as described below in a Molecules journal 2009 study:

“[T]he primary endosperm nucleus undergoes several cycles of division without cytokinesis (the process in which the cytoplasm of a single eukaryotic cell is divided to form two daughter cells). Cytokinesis then occurs, progressing from the periphery towards the center, thus forming the cellular endosperm layer.

At first, the cellular endosperm is translucent and jelly-like, but it later hardens at maturity to become white flesh (coconut meat). Unlike the endosperms of other plants (e.g., wheat and corn), the cellularization process in a coconut fruit does not fill up the entire embryo sac cavity, but instead leaves the cavity solution-filled.”

The “solution” decribed above is coconut water. It’s described by WebMD, "The Truth About Coconut Water" as having a refreshing and nutty flavor. It’s mildly sweet, but not overly so, unlike other fruit juices available on the market. "The Encyclopedia of Healing Foods," 2010 also described it as a astringent and mildly acidic when fresh, which is then lost as time goes by.

Today, Ghanaians are enjoying coconut water not just for its flavor, but also because of its superb health benefits. Coconut water is 95% water according to "The Encyclopedia of Healing Foods," 2010 but, at the same time, it offers a unique chemical composition that features vitamins, minerals, amino acids, natural sugars and phytohormones according to the Molecules 2009, 14, 5144-5164 .

It contains electrolyte, very good ingredient . the liquid an ideal rehydrating drink, but the electrolytes in coconut water are also said to be similar to human plasma, which is why doctors have used uncontaminated raw coconut water intravenously, injecting it into the bloodstream to help avoid dehydration according to Naturopathic Doctor’s Coconut Cure by Bruce Fife

According to Dr. Mercola, Many people, usually those who are not accustomed to having coconut in their diet, often refer to coconut water and coconut milk interchangeably. But these two drinks are actually different. Coconut water is the raw, clear liquid — which develops naturally in the fruit — that you get when you open a fresh coconut.

Coconut milk is a manufactured product made by grating the coconut meat, adding water and squeezing out the juice. This results in a white and creamy liquid, not too different from dairy milk according to "Coconut Water for Health and Healing," 2017 by Bruce Fife. It is used in many ingredients, such as curry and sauces.

Drinking coconut water is something everyone should do as a form of clean water. Not only is it one of the best rehydration drinks available on the planet, the electrolytes and natural salts like potassium and magnesium plays an integral role in wellness, however, coconut water provides more nutrients that are beneficial to the body. Among these useful components are its cytokinins, a class of phytohormones that boast of antiaging, antithrombotic and anticarcinogenic effects, according to one study by Vermeulen K et al 2002 titled ‘Antiproliferative effect of plant cytokinin analogues with an inhibitory activity on cyclin-dependent kinases published in the journal Leukemia and another 1994 study also conducted by Rattan SI and Clark BF titled ‘Kinetin delays the onset of ageing characteristics in human fibroblasts’ published in the journal Biochemical Biophysical Research Commununication. .

This liquid provides inorganic ions, B vitamins and minerals such as iodine, selenium , zinc and sulfur that all provide support for your antioxidant and overall system according to the Molecules 2009, 14, 5144-5164

The liquid inside the coconut contains approximately 46 calories per cup, 10 grams of natural sugar, with little protein and zero fat. It contains multiple vitamins, minerals and phytochemicals that are ideal for human health according to Nutrition and You.com.

The primary nutrient in coconut water is potassium . It contains approximately 600 milligrams (12 percent daily value), making it a high electrolyte beverage. Coconut water also contains a small amount of sodium, about 40 milligrams and up to 10 percent of your daily calcium and magnesium needs according to Today’s Dietitician.com

“Our results indicate that CW has multiple beneficial effects in diabetic rats for preventing hyperglycemia and oxidative stress caused by alloxan.” A separate 2015 study by Preetha et al titled Mature coconut water exhibits antidiabetic and antithrombotic potential via L-arginine-nitric oxide pathway in alloxan induced diabetic rats published in the Journal of Basic Clinical Physiology Pharmacology. also noted that the L-arginine in coconut water is responsible for its antidiabetic and antithrombotic effects, and is mediated through the L-arginine-nitric oxide pathway. Diabetic rats that were treated with mature coconut water L-arginine had reduced concentration of blood glucose and hemoglobin A1c.

Do You Want to Drink Coconut water?

Aside from the benefits mentioned above, you’ll be impressed to learn that this healthy beverage has culinary and cosmetic uses as well. Just like coconut milk and coconut oil , it’s a very versatile product. Just take a look at these coconut water uses that you can try today:

Disclaimer: As pertains to all my previous articles, they are for educational purposes and not to be used as substitute to medical advice.