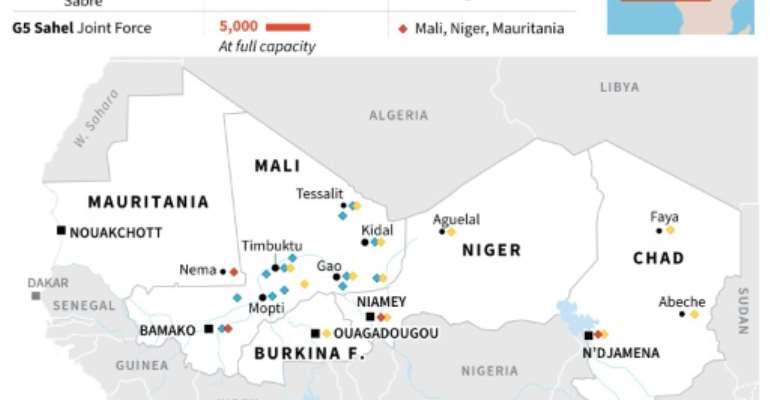 Security in the G5 Sahel region. By (AFP)

Mali, where 13 French soldiers have died in a helicopter collision, is at the heart of a jihadist insurgency in the Sahel that has claimed thousands of lives and driven hundreds of thousands from their homes.

Here is a factfile on foreign military intervention in the region since 2013:

The fast-moving French troops scattered the Islamists within three months.

In August 2013, France replaced Serval with Operation Barkhane, a mission that was extended to apply across the Sahel, an area the size of Europe.

Named for a sand dune blown by desert winds into the shape of a crescent, Barkhane is currently the largest operation deployed abroad by the French armed forces, with around 4,500 troops.

Ten French soldiers lost their lives while serving in Operation Serval and 28 more have been killed in Operation Barkhane.

The French military presence in the region comprising mainly former French colonies is likely to last for years to come, analysts say.

They took over from an African International Support Mission to Mali (AFISMA), deployed by the 15-nation Economic Community of West African States (ECOWAS).

MINUSMA operates today with some 13,000 Blue Helmets on the ground, one of the largest UN military operations in the world.

More than 200 soldiers have died, including more than 100 killed in hostile action.

In November 2015, heads of state in the G5 Sahel organisation of countries -- Burkina Faso, Chad, Mauritania, Mali and Niger -- decided to create a joint military force to fight jihadist forces in the region.

Potential targets included Al-Qaeda in the Islamic Maghreb and the Boko Haram movement based in northeast Nigeria.

After security deteriorated in central Mali in 2017, and jihadist activity spilled over into Burkina Faso and Niger, the G5 Sahel leaders revived the concept of the joint force.

French President Emmanuel Macron lent his weight to the initiative, seeing in it the potential for poor, fragile Sahel states to take charge of their own security.

But the five-nation force remains badly hampered by problems of funding, lack of training and poor equipment. It has carried out only a few missions and is still short of its 5,000-man deployment target.

The programme entails training in planning operations, logistical support and military intelligence, and combat training, which takes place at a camp in Koulikoro, 60 kilometres (40 miles) northeast of the Malian capital Bamako.

The European Union in May 2018 extended the mission's mandate for two years and almost doubled its budget to 59.7 million euros ($65.7 million), while expanding its duties to training for troops in the G5 Sahel force.