The 'Freedom' Of The Working Class Woman 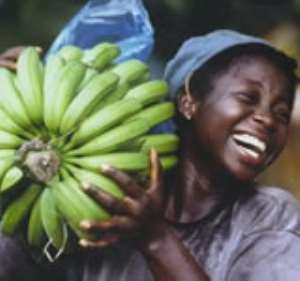 Common women since Adam have worked; the only difference is that women only went out there to pick fruits for the family. They didn't really work for pay. In fact, men in the earliest times also never worked for pay.

Even before industrial slavery championed by European merchants came into being, there were groups of workers who worked for no pay.

They were male and female slaves owned by some royalties and wealthy people.

So, even before the socalled civilization, common men and women worked for pay or no pay. The only special group of people who never worked in earliest times were women of royalties: princess, queens and women from wealthy homes.

So, when common men attained wealth, the women in their houses did not have to work.

Then, in the 18th century, western industrialization set in. Europeans came to Africa to raid and bought slaves to work on cotton farms to feed industries that produced fine garments for the increasing wealthy European population.

And on the fields of the cotton farms, there were women and men. There was no discrimination.

This period began the culture of women working for industrial commercial ventures. So, the common women were actually forced into paid jobs.

Common women suddenly got used to this forced labour to feed European industrial greed. The only problem they had was the pay differences between men and women working on same jobs; and that began the fight for equal pay for equal job irrespective of gender.

In spite of the fact that many common women accepted to work even after slavery was abolished, more women were protected from the working environment. Still, royal families and families of wealth would protect their women from industrial working conditions.

And many women in the past actually desired to be in the house and to be catered for; even up to today.

And this belief is quite erroneous. And I must say there is absolutely nothing wrong for common women to seek their own money; in fact, majority of common women do not really have a choice in this matter in modern times.

But it is quite deceptive to say if fragile common women work, then they earn some freedom.

In fact, there isn't any real freedom for anybody out there slaving to support himself/ herself; especially for women in this dispensation.

There are only two difficult choices.

The one is to be a housewife, depend on a man for everything and take his 'bull shit' as a friend of mine would say.

The second is to take up a routine of slaving morning to sunset for an industrialist , taking 'bull shit' orders from the strange and insensitive slave master for a pay cheque at the end of the month.

In both cases, you take 'bull shit' orders.

Then we have those preaching that women shouldn't accept any 'bull shit ' even from their husbands. If it comes to the worse, the woman should seek her 'freedom'; take the children and leave; after all, she is a Working Woman.

These women pack tbeir things and children out of their matrimonial homes and go to make their own living to prove to their ex husbands and society that they can make it on their own taking care of the children and themselves.

In the end, this freedom they have attained( from patriarchy) is only to slave alone day and night to support the children they took away.

For the rest of their lives they have no life apart from slaving to support the children alone to prove a point.

Meanwhile, the 'tyrant' man they escaped from has pitched camp with another younger attractive Woman who is doing all she can to up his libido for more babies.

The true 'Freedom ' of the modern woman.