Eze Cautions CUPP Over Spurious Allegations Against CJN; Says Atiku/PDP Have No Case 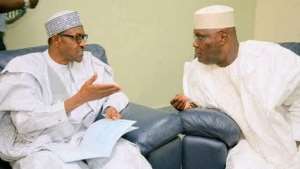 Former National Publicity Secretary of the defunct New Peoples' Democratic Party (nPDP), Chief Eze Chukwuemeka Eze has berated the Coalition of United Political Parties (CUPP) and its spokesman Barr Imo ikenga Ugochinyere for serially attempting to desecrate the sacred temple of justice through incessant media attacks on the apex court for sticking to the principle of justice in the constitution of the Presidential Appeal Panel.

According to him, "It beats one’s imagination as to what the Coalition of United Political Parties (CUPP) intends to achieve from her mischievous and misleading publications targeted at robbing dirt on the nation's judiciary and tainting the reputable image of the apex court before right-thinking Nigerians".

In a press release circulated to media houses in Port Harcourt on Tuesday, Chief Eze described the attacks as "contrary to every recognised standards of civilised behaviours, international ethics and decorum".

Similarly, Eze took a swipe at the Hon.O. K. Chindah led PDP Caucus of the House of Representatives for deserting legislative functions and assuming fresh responsibility of recommending Justices for the Presidential Appeal Panel, stressing that such is ultra vires legislative powers, absurd and outside the scope their oversight functions.

Frowning at the unwholesome attitude of the PDP lawmakers at the lower legislative chambers, Eze wondered why the Lawmakers would abandon the act of lawmaking to meddle into the affairs of the judiciary when there are developing issues of great concerns in society to legislate upon, describing them as meddlesome interlopers.

He counselled the PDP Caucus at the lower chambers to channel their intellectual expertise to legislative businesses for which they were elected and respect the independence of the judiciary, adding that the CJN and his team knows exactly what needs to be done to ensure the delivery of unbiased and impartial justice on the Atiku/PDP appeal.

Eze urged Nigerians not to take O. K. Chindah and Co. seriously, saying their bogus position is lacking in locus and suitable only for a theatrical comedy.

Decrying the incessant condemnation of the legal facilities by politicians who do not get favourable hearing from courts, Eze maintained that the judiciary exists to serve the interest of justice for public good and not the whims and caprices of any individual or group.

He dismissed any form of alliance between the ruling APC and the Supreme Court, describing the allegation as a cocktail of lies, existing only in the figment of the imagination of the opposition CUPP and her satanic collaborators.

He further hinted that the recent publications of the CUPP and the PDP HoR caucus apparently reveals and inadvertently exposes the opposition in trying to discredit the judiciary and sway public opinion in their favour with respect to Atiku/PDP Appeal against the judgment of the Presidential Tribunal which affirmed the victory of President Mohammadu Buhari and the APC in the last general elections.

Eze cautioned the opposition to desist from spurious allegations against the revered office of the Chief Justice of Nigeria and the Supreme Court, stressing that constituting members of the Presidential Appeal Panel is solely the prerogative of the CJN and not that of the presidency.

He maintained that President Mohammadu Buhari has no interest in who becomes what in the Appeal Panel because according to him, Atiku/PDP have no case against the electoral victory of Buhari/APC in the last presidential election.

Assessing the general performance of the judiciary in disseminating justice over election petition matters, Eze scored the courts high, but counselled judicial officers in the country to be wary of being inveigled into a situation in which they find themselves becoming partisan agents of overzealous politicians with inordinate ambitions in the pursuit of their selfish, private vendetta.

The party Chief urged Nigerians to maintain confidence in the independence of the judiciary which constant preoccupation is to do justice through interpretation of laws promulgated by lawmakers.

He warned those hiding under the masthead of CUPP and PDP HoR caucus to unleash attacks on the judiciary to thread with caution, stressing that the duty of the judiciary is not to make, but to interpret existing laws in the dissemination of justice for societal harmony.

According to Eze erstwhile Aide to Atiku Abubakar further stated that those pushing Atiku on this journey are only interested in squandering his hard-earned funds as they are fully aware that "the decision of the judiciary is guided by laws. The Presidential Appeal Panel will, after hearing Atiku/PDP Appeal arrive at a decision according to relevant laws made by lawmakers." The attacks on the judiciary are therefore diversionary and unnecessary.

Eze said, "proofs before the Presidential Election Tribunal revealed the victory of President Mohammadu Buhari/APC in the last general election as unambiguous and crystal clear".

He opined that no amount of onslaught against the judiciary can resurrect Atiku/PDP's case which has long been buried at the Tribunal.

He therefore called on the opposition to play their roles constructively for national good instead of resorting to heating up the polity.

Chief Eze thanked Nigerians for their supports for the President and revealed that the country is already beginning to reap the fruits of good governance in the Transportation sector, Agriculture etc.

He tasked citizens to continue to pray for the success of the APC-led Federal Government, especially in the onslaught against insurgency and fight to end corruption which he said is beginning to yield good results.