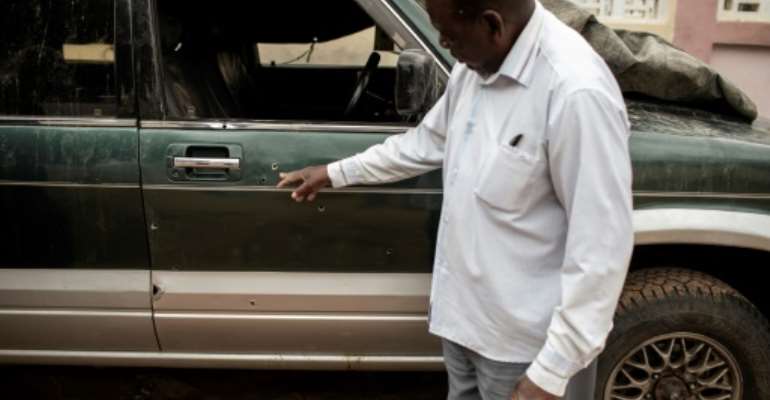 Filipe Mahanjane points to bullet holes in the car where election observer Anastacio Matavele was slain in Xai-Xai, Mozambique. By GIANLUIGI GUERCIA (AFP)

The gunmen left nothing to chance. The dark green four-wheel drive has no less than 10 bullet holes lodged into the driver's side door.

It was an execution.

Anastacio Matavele, the 58-year-old head of a local election observation mission, was shot dead at the wheel of his car in the southeastern Mozambique city of Xai-Xai on Monday.

It was just over a week before elections in the southern African nation, and the shocking assassination of a prominent election observer -- as well numerous other violent incidents across the country during an increasingly fraught campaign -- has heightened tensions ahead of the vote on Tuesday.

Filipe Mahanjane recalls the death of his friend.

"That day Anastacio had organised training for observers who wanted to follow the electoral process," he says. "He made the opening speech then had to leave for the city centre."

Mahajane holds a portrait of his friend Matavele, saying "we want to know who is responsible for this crime". By GIANLUIGI GUERCIA (AFP)

"He was alone in the car, no one saw what happened," says Mahanjane, standing beside the bullet-riddled car, now parked in front of the victim's house.

"We just know that he was shot and taken to hospital. He didn't survive."

With no witnesses, those behind the murder could have easily gotten away with it.

But in their haste fleeing the scene, the alleged killers smashed into another car.

Two of them were killed in the crash, two were wounded and a fifth managed to run off.

Locals quickly recognised the men -- they were police officers, members of a special rapid intervention unit.

Mozambique's national police had no choice but to admit the identity of its officers, suspend the two wounded and launch an investigation. The police have said they will not comment further pending the probe's outcome.

But for the local candidate of Renamo, the country's main opposition party, the motive is clear.

"This guy was working to make the election transparent," says Mouzinho Gama Gundurujo.

"So they killed him."

A billboard in Xai-Xai for President Filipe Nyusi, who is running for his second term in office in Tuesday's election. By GIANLUIGI GUERCIA (AFP)

By "they", he is referring to the ruling Frelimo party of President Filipe Nyusi, who is running for his second term in office.

Frelimo has been in power since Mozambique gained independence from Portugal in 1975 and is expected to prevail once again in presidential, parliamentary and provincial elections on Tuesday.

The country is still struggling to shake off the legacy of decades of violent conflict between Frelimo and former rebel group Renamo after the two sides sealed a historic peace treaty in August.

Xai-Xai is the capital of the Gaza province, a key Frelimo stronghold three hours north of the capital Maputo.

Campaigning in Gaza was bitter, marred by numerous incidents of intimidation and threats.

"We know that death squads exist and that the police conduct special operations to silence politicians and activists. They serve as an arm of the ruling party," says Renamo's Gundurujo.

"Above all we know that a huge fraud is being prepared here."

Before his death, the observer non-governmental organisation Matavele belonged to had revealed a series of irregularities in Gaza's electoral lists.

Enrolment has more than doubled in Gaza in five years, from 591,000 to nearly 1.2 million -- by far the biggest increase in the country.

Renamo supporters register in Xai-Xai for the election, which ruling party Frelimo is expected to win. By GIANLUIGI GUERCIA (AFP)

Civil society groups and the head of the National Institute of Statistics have expressed concern about the size of the jump.

But the National Electoral Commission (CNE) has confirmed its calculations and increased the number of Gaza seats from 14 to 22.

"There is no scientific explanation for those figures," says Ericino de Salema, commentator and lawyer at the Electoral Institute for Sustainable Democracy in Africa.

However he did indicate a potential political advantage for Frelimo.

"Gaza is the only province in the country where the opposition has never elected a single MP."

Several local observer NGO groups in Xai-Xai estimate there are around 300,000 "ghost voters" in Gaza -- names on the electoral roll not aligned with real, potential voters.

And some observers in the province said the CNE had been slow to grant them accreditation for polling day.

"We were the first to speak out about the extravagant number of registered voters, so they are doing everything they can to keep us out of the process," said one observer on the condition of anonymity.

On the ground, Frelimo candidates don't want to discuss such accusations.

Anastacio Matavele's mother mourns his death with his family in Xai-Xai. By GIANLUIGI GUERCIA (AFP)

"The opposition complains about problems just to gain sympathy because it has no programme," says spokesman Caifadine Manasse.

"There will always be opportunists to create disorder and attribute blame to Frelimo and the police."

Meanwhile the friends and family of Anastacio Matavele wait for answers.

"He trained those who needed to observe the voting process, which you want to be free, fair and transparent. He only championed that," a grief-striken Mahanjane said.

"So we want to know who is responsible for this crime."